While squirrels appear cute and cuddly, they are an animal not to be
trifled with. Last week it was reported that the Chater Infants School in Watford,
Hertfordshire, England, was faced with an unusually aggressive gray
squirrel. Teachers quickly rushed the terrified children back into
school to get them away from the pushy rodent. 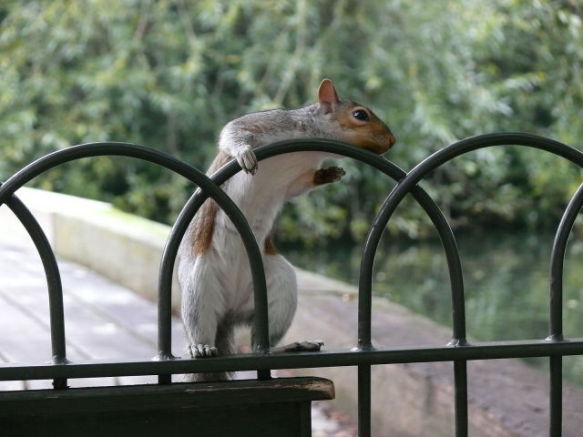 In October the squirrel in question was disrupting playtime and even scratched one of the teachers. The rodent's actions were unusually aggressive so the teachers chose to evacuate the playground rather than take any chances. The safety of the children was their first priority.

While some of the children were scared, this wasn't some mass panic of children screaming as they ran toward the building as the first reports suggested.

The children were later pulled together in an assembly so that they could be told what to do and how to handle encounters with wild animals, and bad tempered animals of all kinds. School staff has been on the lookout ever since, but the apparently angry squirrel has not be seen since.

Having been climbed by a squirrel, I can attest to the fact that the critters can be a bit alarming and aggressive in their behavior even when they are actually being fairly innocent. In this case it was my own fault. I had been feeding it a cookie and the cookie ran out before its appetite did. It decided to take this matter up with me face-to-face.

The final word is: when it comes to squirrels it is better to be safe than sorry.