Bibi and Poldi are two giant turtles that have shared living spaces for nearly all of their 115 years. (Imagine these turtles were born in the 19th Century!)  They were so inseparable that when they changed zoos from Switzerland to the Austrian Zoo in Klagenfurt 36 years ago, they were moved together. But recently, the couple had to be separated... 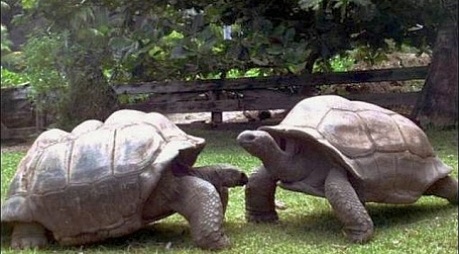 Bibi and Poldi, giant turtles at the Klagenfurt Zoo in Austria: image via brcko-24h.com

... when Bibi, the female, began 'biting' Poldi so hard that it broke off part of his shell. Though giant turtles don't have teeth, they do have a horned-rimmed mouth and powerful jaws.

The zoo keepers are totally befuddled by the behavior of the two, but they are trying to encourage togetherness whenever they can, offering them 'romantic food' to get them into a good mood and getting the pair involved in playing games together.

The turtles, however, will have none of it, and according to reports, 'just can't stand each other.'

Under the circumstances, the zoo will have to keep Bibi and Poldi apart.  The each weight 100 kilos (220 pounds) and could easily kill each other if they really get started fighting.

Ah love... Does it ever last forever?

When Things Get Too Close For Comfort "Animals Strike Back"

Poodle Skirts Are Back... For Dogs