While our real-life pets find a special place in our hearts, there are many found on TV, in the movies and online that we've grown fond of as well. We think of them similarly to those that inhabit our households, because in many instances they often take up residence from time to time. One such creature is the spokesduck for Aflac

Unfortunately, the unthinkable happened on January 7th when it was reported the beloved bird of TV commercial fame was injured. 'The Daily Quack' reported he was brought into County Memorial Hospital with lacerations to the wing and a fractured beak. In this breaking news report, his doctor talks about his injuries and how Aflac Insurance can help pay the bills while their Duck focuses on recovery.

On Aflac's Facebook fan page which currently has over 350,000 LIKES, the company has made a "Get Well Duck" card available for all those who hold the quacker near and dear to their hearts. 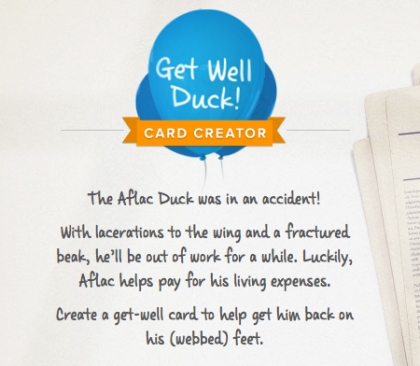 Updates on his condition can also be received via social media, according to blogger Sophia Venetos, and reports that the "bird is going to pull through."  On January 7, @AflacDuck tweeted to his +18,000 followers the following:

His Twitter profile photo and header image have been updated to reflect his hospitalization. The header also features a get well card on his night stand. 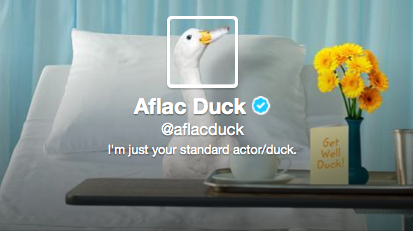 Aflac's corporate communications manager Jon Sullivan told the marketing news site ClickZ that the Aflac Duck Facebook page has received over 1,100 LIKES since the campaign launched, and that in the first two and a half days of the promotion, the Duck received more than 4,050 cards.

"Facebook posts are showing that the public has a deep concern for the Duck's recovery as well," says Sullivan. The point of the campaign is to demonstrate the value of Aflac from a policyholder's perspective, he adds. This directly correlates to how Aflac's insurance policies can help protect families against unexpected setbacks.

Now, I know some folks might not find the Aflac Duck that endearing. In fact, many are annoyed by his constant quacking, and have been known to switch TV channels when he appears. So hospitalizing him was an ingenious marketing brush stroke by Aflac to make their customers feel some empathy for a character whose been around for over a decade. That is unless, another one of our beloved insurance spokespets were to ever to take ill.  Aflac Duck vs Geico Gecko - hmmnn, who would you be rooting for?

UPDATE: February 13, 2013 - For all those that have been calling County Memorial Hospital for the Aflac Duck's current condition, the insurance company took it upon themselves to provide his fans with this update. Here you can see the attending physician and his interns providing a humorous medical update. Note the duck's beak has been taped shut so he can't comment in his usual honking manner...

Want To See How It Looks To Be Hugged By A Filly? The Animal Video Of The Day!!!
Comments