Like An Aesop Fable, Goat Goes Toe-to-Toe With Tiger! 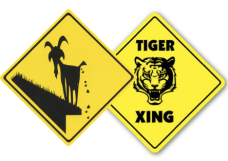 We’re all familiar with real-life stories sometimes being stranger than fiction. But how about an Aesop Fable? In the case of Aesop’s ’The Goat and the Tiger’ we learn of a goat chastising a tiger from his protective vantage point of his owner’s roof. Similar to all of this Greek storyteller’s tales, this fable came part and parcel with a moral -- namely:  Sooner or later you will have to face the consequences of what you have said. 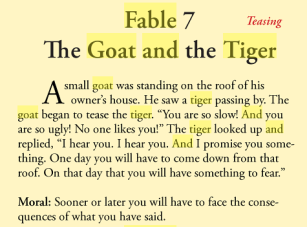 Well, flash forward from Greece’s 6th Century BC to the Russia’s 2015 AD, where we just learned of a similar case . . . but this time, with a slight twist. Today we find Timur, one feisty little goat not afraid to confront an Amur Tiger, living in Primorsky Safari Park.

Dmitry Mezentsev, the park’s director, told RIA Novosti that Timur was meant to be the hungry predator’s dinner meal. This Park traditionally breeds tigers in captivity, and their program requires to provide the tigers live food periodically. As a result, during Amur's three years at the park, it's been said he has dined on a lot of rabbits and goats.

“Year-round, we feed the tigers live prey twice a week,” he told the news outlet, adding that the Amur tiger had killed many goat previously, including much larger members of that species.

But as fate would have it this go-around, this cheeky little goat really showed his mettle. "He flashed his horns and retaliated every time the Amur attacked,” Mezentsev told RIA. “The wary tiger was confused by this, and he decided not to mess with the goat.”

In this video clip of this extraordinary encounter, Timur is seen bravely following the big cat around the enclosure. In a blog post, the park added that Timur had even shooed the tiger away from his usual sleeping spot, and the plucky goat had been sleeping there ever since. The Amur tiger, on the other hand, has been relegated to sleeping on the shelter's roof.

So once again a goat takes the high ground but this time he actually steals the hearth out from under his predator. 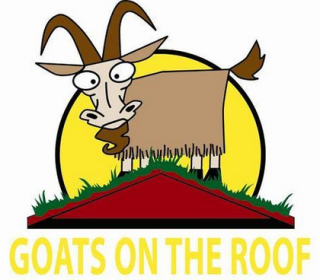 Century version of this tale, it appears real-life has turned that ancient Greek fable on its head.

One can only imagine ole Aesop turning over his grave once getting privy to this modern-day reversal of fortunes. Evolution? Or, one fool-hearty goat? In either case, what a difference a couple of millennia makes.