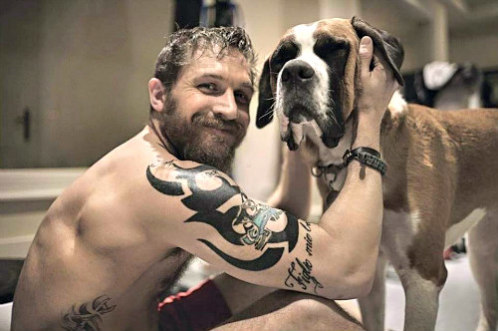 Tom Hardy and St. Bernard having a moment: Image via Tom Hardy Facebook

Tom Hardy has been captured on camera snuggling up to a bevy of British beauties, and it's not for a movie, either. If truth be known, it's not the first time the hunky actor has been caught in the act. That's because those "beauties" happen to be dogs, creatures the talented Brit holds a special affinity for, and Hardy happily shares that fact with the entire world. This time, however, his love of pets will be shared on a U.K. television show called For the Love of Dogs, in which he visits the Battersea Dogs and Cats Home to cuddle with dozens of his favorite animals. Being an animal lover, Hardy has two dogs of his own and is known for bringing them to red carpet events, including having his adopted dog Woodstock (“Woody”) tag along to the recent U.K. premiere of his new movie Legend. 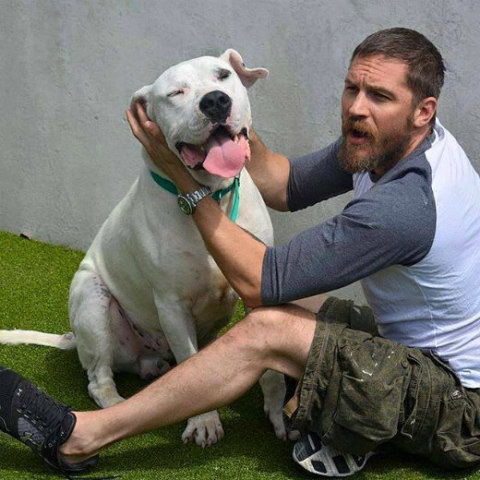 For the Love of Animals is hosted by Paul O'Grady and features interviews and coverage of canines in the care of the Battersea animal shelter and its staff. In each new episode, Paul is introduced to a few of the dogs that were brought to Battersea as strays or due to the fact their owners were no longer able to care for them. He then follows each dog's progression through the wonderful facility in hopes of a happy outcome. O'Grady, an obvious animal lover himself, has been noted in the past as saying that he'd wanted to do a show with a format like this for many years. Apparently, he took to it like a duck to water, because his enthusiasm for the project turned into a series. Originally slated to film at the Battersea Dogs and Cats Home for just six days, O'Grady purportedly stayed on as a volunteer for six months. At the conclusion of the first season, he was invited to become an official ambassador for Battersea Dogs and Cats Home. 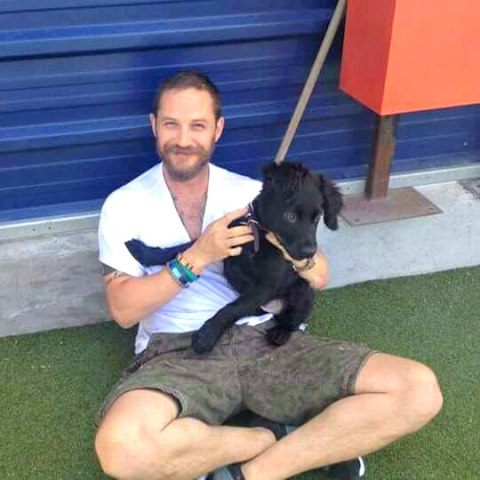 Tom Hardy's appearance with Woody isn't his first time to the red carpet rodeo with a pooch unabashedly in tow. Last September, he was seen walking the red carpet with his The Drop co-star Zora, the adorable pit bull he rescues in the sleeper movie also starring James Gandolfini. It's rumored Hardy and his pit bull co-star and her body doubles bonded so much that he took them home at night during filming. Later, it's said he felt so protective of the much-maligned breed that he went on to try and dispel the misinformation about their ugly reputation in several noted interviews. He told Yahoo, “Sausage dogs bite more people than pit bulls do. Labradors bite more people. There’s always a dog that’s getting the bad deal, like: ‘He’s the bas#%rd! That’s a bad dog.’ But in the right hands, that dog could be a very different dog.“ 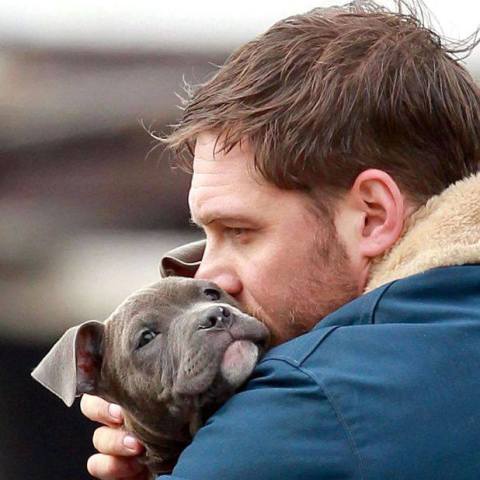 Tom Hardy's outspoken animal advocacy extends beyond pit bills and their perceived reputations. He's gone on record numerous times about his opinions concerning the treatment of canines, even going so far as to razz poodle owners for their choices in coifs. In a GQ interview, Hardy gave readers his blatant and explicitly funny take on the subject of poodle hairdos, but we can't print it here. Getting back to his upcoming appearance on For the Love of Dogs, O'Grady reportedly introduced Hardy to a 1-year-old American Bull Terrier named Titch in hopes that the actor would add him to his growing family. From images circulating around the Internet, it looks like O'Grady didn't have too tough a time making the sell.

On BuzzFeed, the actor is quoted as saying, "All dogs are great, but sometimes you connect with one immediately. Titch is cut from my very fabric. He feels like an extension already of me and my family." His obvious love for dogs is very touching. For those able to access it, the episode of For the Love of Dogs featuring Tom Hardy will air on November 5, 2015, at 8:30 p.m. on ITV, so set your DVRs if you're not going to be home.

Get To The Point! Unicorn Horns For Cats

Advertise Where Wayward Cats Can Go

PetsLady's Pick: Cute Elf-Stalking Cat Of The Day
You Shall Not Pass! -- The Gandalf (well, sort'a) Animal Video of the Day!!!
Comments