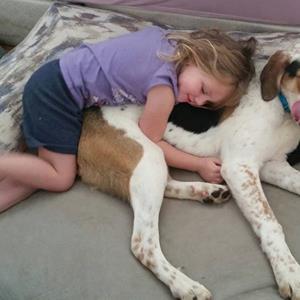 As heartwarming stories go, this one's a doozy! An overwrought dog that was basically growing up in the system of New Mexico's various animal shelters has had a stroke of luck. At only 10 months old, Baxter, as he is called, literally had to be carried out of one of the shelters a quivering mess due to the noise and commotion at the busy facility before being deposited at Animal Humane New Mexico.

Adoptions director Sam Blankenship said, "Baxter was completely non-responsive, as he had learned to shut down rather than deal with the stimulations that were depleting his personality." Yes, it's heartbreaking to hear stuff like that, but Baxter's life and circumstances improved immensely when he was adopted by a loving family with a special needs child named Neeva.

It seems Neeva's parents had been looking for a four-legged companion for their daughter, but it couldn't be just any dog. Neeva was born deaf, and her family wanted a dog that would be patient and gentle with her, much like Labrador retrievers, who are known for their sweet dispositions and easy temperament. They went to Animal Humane New Mexico and found Baxter just waiting for somebody to bring him home and to love and understand him.

While Neeva had considerable love in her life, she communicates through American sign language (ASL) and is limited in her communications with the outside world. Of course her family knows sign language, but let's face it, not many people do. Since Neeva and Baxter both had the same needs in that they craved interaction and understanding, it seemed like a perfect fit. 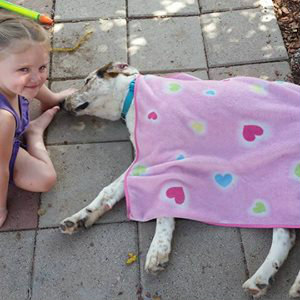 But that's not where the story ends. Neeva took it upon herself to try and teach Baxter what her signing meant, and her mother Chelsea Goff swears Baxter understands. The lovable mutt now knows how to sit and stay and go all through sign language. Neeva has even given him his very own name in sign language.

For his part, Baxter has helped Neeva with her confidence and at becoming a better signer with all the practice the two of them get communicating with one another. Goff says, "He is such a sweet, gentle, and friendly pup and we are having so much fun with him in our 'pack'." Now that the pair have found each other, they are inseparable and do absolutely everything together. It seems they have blossomed into happier and more fully developed versions of themselves just by being together.

While Baxter may understand Neeva, he obviously can't sign back to her in return. But there are animals such as primates that have learned sign language and developed the ability to communicate through the use of it. The most famous of those examples is probably Koko the gorilla, who has a vocabulary of over 1000 words in the language she's been taught. Interestingly, no one form of sign language is universal.

Different sign languages are used in different countries or regions of the world. That's why here in the U.S. our version of it is known as American sign language. No one knows for sure the exact origin or time that ASL came into being, but it is believed to have taken root some 200 years ago with the intermixing of local sign languages and French Sign Language, according to the National Institute of Deafness and Other Communication Disorders. 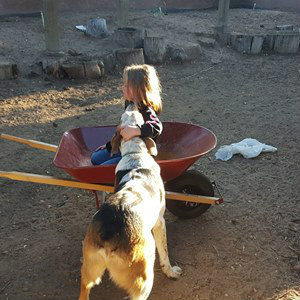 While Baxter isn't a registered therapy dog, his contribution to Neeva and the Goff household in general has made a huge difference in their world, and he might even be considered suitable for the task outside of the home. If you have a pet that you think might make a wonderful therapy animal, you can look into getting it trained and accredited for "active duty" at hospitals, nursing homes and in other situations where people could benefit from their visits.

Most states have their own certification programs rather than a national branch, so you'll have to check into it in your state. Groups like the Animal Health Foundation provide pet partner teams to folks in Southern California that could use a little interaction with a furry friend. It's long been known that children and adult patients recovering from injuries or illness and the depressed improve markedly with this kind of therapy. For our part, we're just glad Neeva and Baxter found one another.

It’s A Bear-Eat-Bear World In Canada!

African Grey Parrots May Be The Most Unselfish Creatures On Earth

The Dark Side Of A Pandemic Lockdown For Wildlife