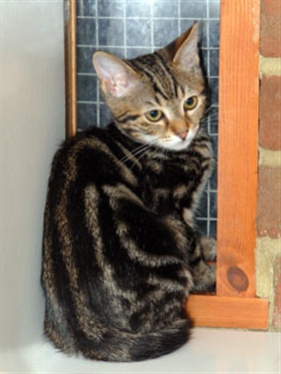 This pretty tabby was named "Yonda" by the logistics workers that found her.find a live six week old kitten in the back of a trailer that had just traveled 2000 miles from Turkey to Kent in the UK.  The surprise passenger seemed timid and frightened, but nonetheless healthy considering the jouney it took.

The people at Davies Turner did the right thing by calling upon Cats Protection for help.  Cats Protection is a charity out of London that finds homes  for abandoned cats.  A spokeswoman from the agency said they are assuming the kitten ended up on the trailer after looking for a warm place to take a cat nap.  Little did the cat know it would wake up in another country nine days later.  Cats Protection also said that the "vigilance and kindness" of the people at Davies Turner essentially saved the cat who they named Yonda.

Yonda is safely being quarantined as many pets are lawfully obligated to do when entering the United Kingdom.  The UK has a pets passport type of law for cats, dogs, and ferrets that protects them against rabies coming into the area.  The laws are different depending on what country you are coming from, but can include having rabies shots and a micro chip.  Yonda most likely does not have any of the required protection, so she will be in a quarantine facility for the next six months.

The quarantine process can be a pricey one costing anywhere between four to five thousand united states dollars.  Ekol, the Turkish company who owns the trailer Yonda was found in, and Davies Turner have both graciously donated funds to help towards the kitten's expenses.  Cats Protection is now reaching out to the public to donate towards the necessary funds needed to keep the kitten safely sheltered until they can find her a new family to call home.