5 Red Wolf Pups Born Into Species Survival Program, And YOU Get To Name Them!

In 1970, there were only 14 pure Red Wolves left in the world, hunted to
the brink of extinction. Now, thanks to a long term propagation program
for the Red Wolf there are about 250 of them, 100 of which have been
released to a Red Wolf habitat in North Carolina.  Every birth is
celebrated, and the Point Defiance Zoo and Aquarium in Tacoma,
Washington is doing just that, celebrating the birth of its first five
Red Wolf pups in 29 years!  And you get to name them.... 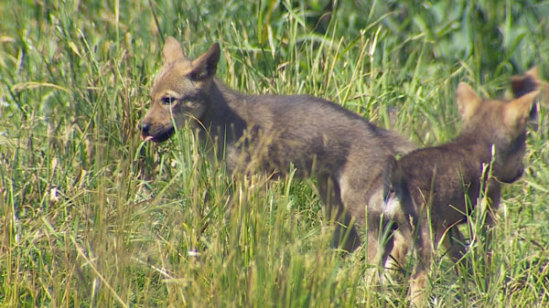 The
five pups were born in May to Millie, an 8 year old female Red Wolf,
and Graham, their 9 year old father. Here are all five babes in the wood
- a native habitat provided for them by the zoo.

Now that the pups are not strangers to you, would you like to help choose their names?  Point Defiance Zoo and Aquarium has created two lists of possible names for you to select from:

To vote, go to Red Wolf Pups.  Registration is not required.

Argh, Matey, It's A Pirate's Life For Pets With Cool Toys And Accessories All Year Round!
10 Special Valentines That Will Make Your Pet Smile
PetsLady's Pick: Funny Chocolate Dog Of The Day
Comments