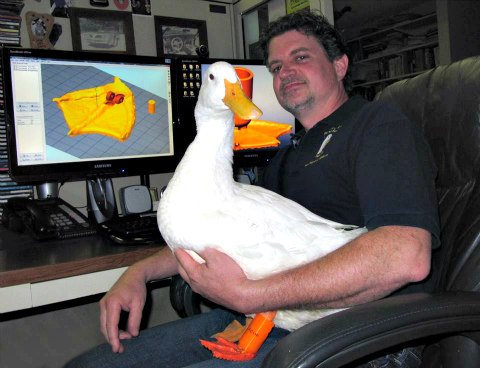 Modern technology has once again come to the rescue of an animal in need. Over the last few years it’s been reported with increasing frequency about the use of 3D printers in connection to fashioning prosthetics for animals suffering from disabilities, either from birth or as a result of some type of injury. These stories generally have a happy ending with the afflicted animal being fitted with a new limb or paw with life changing results. One of these stories is about a duck by the name of Buttercup that’s the lucky recipient of a brand new webbed foot courtesy of Mike Garey, owner of Feathered Angels Waterfowl Sanctuary located in Arlington, TN.

Founded back in 2007, the Feathered Angels Waterfowl Sanctuary (FAWS) got its start after Mike and Jennifer Garey (husband and wife) recognized the need to provide a safe haven for various waterfowl that were sick or injured. Through medical care and proper nutrition, the two have been able to transform the lives of those in their charge on the 2-acre sanctuary. Buttercup was born on November 9, 2012, with his left foot or palmate, as they’re known, backwards. As the story goes, Buttercup’s mom, Chase, worked with the white Pekin or domestic duck to try to get his foot turned around so that he might have some semblance of a normal life. 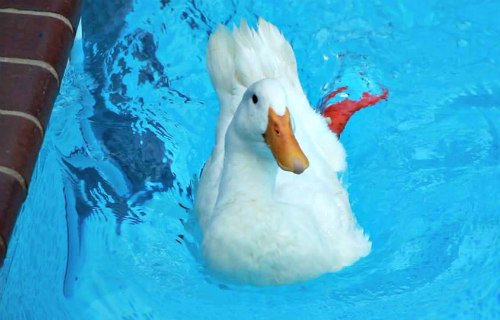 Unfortunately, Chase’s efforts were only partially successful. While Buttercup’s palmate did turn some, it never fully revolved to face forward. Injuries and birth defects in animals leave them at a distinct disadvantage to their whole counterparts. Sadly, these disadvantages usually result in their early deaths, for they are often unable to fend for themselves as far as food and predators. Enter the FAWS in 2013, where Buttercup was adopted by the Gareys. It was in this peaceful setting that the couple’s veterinarian, Dr. Shannon McGee, recommended that Buttercup’s foot be amputated. That could have been the end of the story, but it isn’t.

It was shortly after that that Mike Garey decided to create a prosthetic palmate for Buttercup, and by June of 2013 the first prototype was finished. Garey accomplished the task by making molds of a 3D printed copy of Buttercup’s girlfriend’s left foot. Her name is Minnie. After the appliance was fitted, Buttercup took off on it like a duck takes to water and, in the process, became an instant celebrity. He even became the only honorary Peabody duck in the 80-year history of the Grand Hotel. But Mike Garey wanted to supply Buttercup with a webbed foot more suited to a duck’s life by designing a foot for swimming. So, in 2014 the foot design advanced to become fully 3D printed with a bendable ankle featuring springs for support. 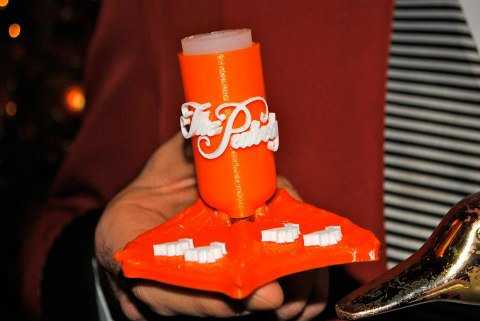 Now Buttercup is basically like all the other waterfowl on the sanctuary — except one of his feet is red and made of plastic. Other than that, you’d be hard pressed to tell the difference between him and the other ducks. He and Minnie pass their days idyllically among friends swimming, quacking and waddling their way through life without a care in the world. If you’d like to learn more about Buttercup, Minnie, the sanctuary and the rest of the birds living there, check out the FAWS website where you can view more pictures, glean information and even donate to a worthy cause.