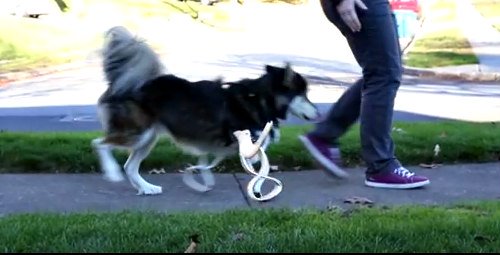 By now, many people have heard about all of the incredible things 3D printers can produce and the impact the technology is making in the medical world. Advancements in prosthetics for humans and animals is just one of those areas, and a dog named Derby is the latest creature to benefit from that technology. Derby is a 2-year-old husky born without fully formed front paws, but he hasn’t let that get him down. Dogs are known to adapt quite quickly to the injustices of nature or accidents that befall them. Their indefatigable spirits allow them to learn to walk on three and sometimes even two legs, if need be, but that doesn’t have to be the case anymore.

Derby’s been given a new lease on life because of a pair of prosthetic legs provided to him last year by a technology company known as 3D Systems. While the tech company’s generous contribution was a beginning, the legs started out a tad too short for Derby’s actual height. The prosthetics enabled the happy husky to walk and run, but he was unable to stand at what would be considered his true stature in accordance with his rear legs. Not to worry. His starter legs were recently replaced with new custom-fit prosthetics that allow Derby to stand tall and walk with a relatively normal gait.

Once you see Derby's profile, as he's maneuvering on his new prosthetics, you’d almost think he'd been using them since birth. It's amazing. Derby is now getting around like nobody's business, and 3D Systems couldn’t wait to release a video to show just how well he’s doing and how far he's come. During the video Tara Anderson explains that Derby’s original prosthetic limbs were purposely created at a lower height so that the transition would be gradual. In other words, they wanted Derby to get used to walking, period, before cutting him loose on taller prosthetics. I guess you could liken it to a foal or a baby giraffe trying out their wobbly new legs and needing to get used to them.

In the interim, the group went through many different design iterations and heights to gradually get him to where he’s at now. As the designs continued to evolve, eventually the team hit upon an ideal setup for Derby’s particular needs. According to his owner, Sherry Portanova, he adapted quite well to his latest (and hopefully last) pair of prosthetic limbs, and he’s doing quite well. She also reports that he’s able to stand and sit naturally, like a normal dog stands and sits, which up until now is something he’s never been able to do. If you watch the video below, you’ll see how spot on they are for him and how happy and well adjusted he seems to be with them.

This story is not that far off from the story of a feline named Vincent who recently received a pair of lower limbs constructed of titanium courtesy of the school of veterinary medicine at Iowa State. Thanks to Dr. Mary Sarah Bergh, a veterinary orthopedic surgeon and professor at the university, Vincent is now making his way through life with the same kind of curiosity cats are known for, only on bionic legs. Advances in veterinary medicine are ensuring that animals that might otherwise have been put down are able to lead long and happy lives now. Our hats off to technology!

Liven Up Your Kid's Room With 3 Fun Doggy Designs
Comments