338 Sharks Tweet Their Location When Close To Australian Beaches!

Scientists in West Australia have tagged over 300 large and potentially dangerous sharks with an electronic transmitter that sends a tweet to Twitter to warn surfers that a massive individual is currently swimming in the area. Saving people and getting alpha predators to use Twitter? How cool is that?! 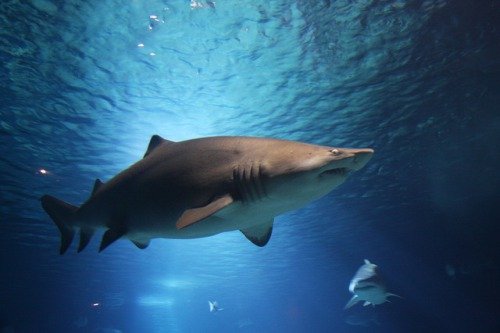 Shark spotting has traditionally been done with the aid of helicopters and boats, and any information about a huge shark off the coast of West Australia would be broadcast over the news many hours, if not an entire day, later. Sure, it’s nice to remind swimmers that they’re sharing the water with dangerous fish, but by the time they heard the news, the shark could’ve moved anywhere along the coast. Now that the official Surf Life Saving WA Twitter feed updates as soon as a tagged shark gets within a half-mile of the beach, surfers are instantly aware of what kinds of sharks are in the neighborhood.

It’s a fantastic concept, a great use of technology, allows us to learn more about these aquatic behemoths and most importantly, helps to keep people safe while enjoying the ocean. Too bad that the sharks themselves don’t get a chance to personalize their tweets with thoughtful quips like “OMG! Where are all the surfers?! #BeingTaggedSux” and “Hit tourist’s kayak with nose to watch her jump- LOL!”