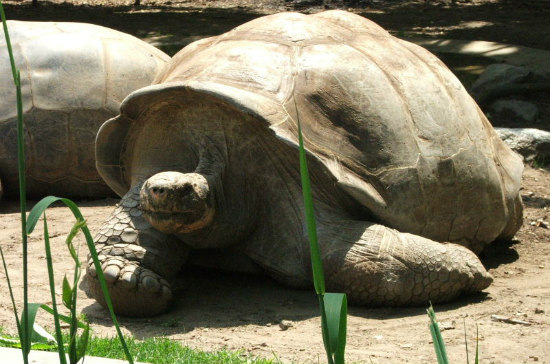 All living beings need a nutritious diet to sustain themselves if they're going to live a long and healthy life. It's just the way it is. From people, to hares, to tortoises and everything in between, proper diet can not only extend our lives, but it can make all the difference in the world when it comes to how we feel both physically and mentally. Don't believe it? Just ask Jonathon, a giant tortoise originally from the Seychelles islands located in the Indian Ocean off the coast of East Africa, north of Madagascar. If Jonathon could talk, he'd probably tell you how a recent change in diet has given him a new lease on his approximately 183-year-old life.

Tortoises are known to have one of the longest life spans of any living creature. On average, they are capable of living anywhere from between 100 and 200 years of age, sometimes longer. Due to this, they are the symbol of longevity in several cultures throughout the world, one of which is China. Back in 2005, a 175-year-old giant Galapagos land tortoise in Australia named Harriet passed away, leaving Jonathon with the title of oldest known tortoise. But these ages are approximate. Both Harriet and Jonathon could actually be much older — or, in Harriet's case, have been much older. Neither was raised from a hatchling with their progress charted throughout their entire lives. When found, their ages were approximations based on size and what limited knowledge scientists had of them at the time.

In Jonathon's case, it was estimated that he was about 50 when he first came to live on the remote island of St. Helena, a south Atlantic British overseas territory, in 1882 as a gift to the then governor. Trivia buffs might be interested in the fact St. Helena was the location of Napoleon's second exile and ultimately the place of his death in 1821. The outpost has been much kinder to Jonathon. But after well over a century of living there it was observed that the giant tortoise was succumbing to old age in the form of loss of vision, a reduced sense of smell and a lessening of activity. Resident veterinarian Dr. Joseph Hollins noticed the serious decline in Jonathon's health and promptly placed him on a diet full of fresh, healthy fruits and veggies like cucumbers, carrots, lettuce, bananas, apples and guavas. It didn't take long before the island's residents started seeing noticeable results.

Benefits of a Healthy Diet

Jonathon went from barely being able to lethargically scrape together a meal of leaves, twigs and dirt on his own to a noted increase in activity, a healthy weight gain and a redevelopment of his sharp-edged beak necessary for pulling and eating grasses and other foods central to their normal diet. The improvement has been nothing short of remarkable. Due to this recent transformation, experts suggest that there's no reason to suspect that Jonathon might not easily reach the 200-year mark or beyond. As long as he continues to receive the benefits of a healthy diet, anything is possible. And that's how it works for all living beings, proper diet and everything in moderation seems to be the key to longevity — and not just achieving old age, but a healthy, functioning old age with quality of life. Of course genetics plays a role and inherited risk factors, but a healthy lifestyle can make a difference.

The Tortoise & the Hare

There's an old story commonly retold about a hare and a tortoise. Hares, as many people know, are classified in the same family as rabbits. They're super quick and known for their long ears and long hind legs. In this story, known as one of Aesop's Fables, the hare was giving his tortoise neighbor a hard time about his stubby legs and slow, lumbering gait. As the fable goes, the tortoise was not put off by this and laughingly challenged the hare to a race. The hare, believing he couldn't be beat, accepted the challenge. The day of the race the two competitors started off at the same time with the tortoise immediately falling far behind. This didn't deter the tortoise one bit, for steady as she goes seemed to be its mantra. Before long the hare was so far ahead that he felt he could easily take a nap and still win, but that wasn't the case. The tortoise with its slow-but-steady-wins-the-race attitude crossed the finish line first, much to the hare's chagrin.

The point is if you keep at it and stay the course with healthy lifestyle choices and commit to an everything-in-moderation mindset, you can greatly influence the outcome of physical and mental aging for you, your family and your pets. Kids learn by example, but pets rely on you to do what's right for them. If you want your beloved pets to be around for years to come, make sure they get plenty of exercise, feed them nutritious foods that don't include table scraps and human treats, and take them in for regular checkups with your veterinarian. Remember, slow but steady wins the race in the long run, not the fast and the furious for the short haul.

You Will Soon Be Seeing Miscanthus As A Fiber Supplement In Your Pet's Food... And That's A Good Thing