The launch of multi-million dollar start-ups has become commonplace in today business milieu. Since the turn of the century, we’ve witnessed a lot of innovation. From Internet advancements, to smartphones to Google’s ubiquitous diversified line of products from search to augmented reality, most of what we have seen is the result of this decade’s Renaissance of Technology.

So for something new to capture our attention, it takes a lot. Except, perhaps when that something new is completely devoid of technology and is propelled by old-school ‘nature’ versus machines. Such is the case with a small firm in New Orleans, with a very unique value proposition, called Y’Herd Me?Landscaping. 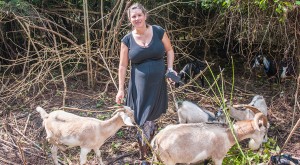 Founder Morgana King launched the company a year ago before securing her first paid contract to clear the underbrush at the city’s Brechtel Park. Having been a goat owner for 10 years and with a herd that has grown from one to two animals, her business model is fairly simple. She uses goat-powered landscapers to do the job of land mowers.

King then presented her idea to Ann MacDonald, director of Parks and Parkways who awarded her with a six-month, $5,000 landscaping contract. MacDonald is so pleased with the results that she’s looking at its budget for 2015 to see if the Parks department can expand the program.

“This one park alone is so vast we feel that the best model for us would be to work with a herder to get a larger inventory of goats,” MacDonald said. “It’s a great concept especially for natural parks like Brechtel and could also be expanded to help the city deal with blighted properties as well.”

Caring for a goatherd however requires a considerable amount of upfront cost. King said her initial investment for her start-up was about $5,000 for the goats, fencing, a trailer to house the animals at night and transportation costs.

While there is no definitive use case yet to show that her goat-delivered services are more cost-effective than traditional landscaping, using goats instead of machines provide other advantages. After all goats are an ecological solution where refuse is disposed of in a natural way. If machines were set to the task, there would still be a need for a clean-up team to collect and dispose of all the trashed plant remnants.

And apparently this green-alternative is one that’s been set in place by other goatherders around the country. Dawn Yurkiewicz and her 14 goats have taken to landscaping at the Stratford Farms in Cecil County, Maryland.

. . . and  Mary Bowen, owner of the Green Goats and Prosperity Acres Farm in Calvert County brings her goats to clear overgrown areas of backyards in this video.

While technology may be the go-to formula for many of the advancements in our hectic fast-paced lifestyle, the goat landscaping business model is definitely an alternative that "has legs," both literally and figuratively. And perhaps - it's a lesson for all of us - that if we just slowed down a little bit and thought about coming up with options in place of technology for some of our other endeavors, we might just find that hi-tech isn't always the only solution.

Tiger Party Is All Wet

Animals Talk To Each Other With Civility
When You Cross An Armadillo With A Dragon . . .
Comments