British fisherman Bernie Campbell went on a fishing trip
with his son in Barcelona, Spain, and not only caught the largest wels catfish
ever recorded, the leviathan happened to be a rare albino variant to boot!

The duo hooked the massive catfish in River Ebro, where it
nearly pulled the father into the drink at least four different times and it
took them around a half hour to pull the beast ashore. They were lucky to have
discovered such a large albino variant, especially since the unusual white
coloring of albino animals makes them an easy target for predators in the wild;
especially when they are younger, smaller and more vulnerable. Perhaps the
coolest fact about this 206 pound wels catfish is that it was a whole ten
pounds heavier than the previous record holder, which was landed in 2012. Since
this fisherman had the freshwater catch of the year and the mammoth catfish was
safely released back into the river after posing for the camera, this fishing
adventure ended up being a happy story for everyone involved! 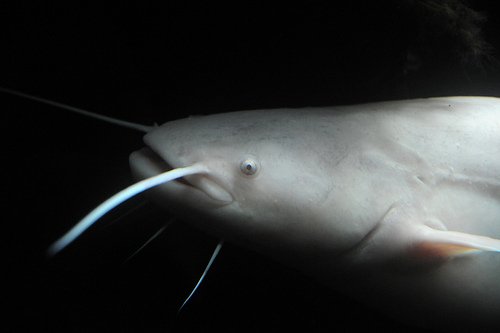 Wels catfish are commonly found throughout Europe’s fresh
and brackish waters, where the larger individuals fill the role of alpha
predators of the lakes and rivers they call home. Younger wels catfish
generally hunt bugs, crustaceans and smaller fish, but the big ones prey on
frogs, ducks and have been known to lunge onto riverbanks to grab pigeons as a
crocodile would nab an unlucky zebra. While the wels catfish is a captivating
sight to behold and a savage hunter, the thought of a duck being snapped up in
an instant by a 200+ pound fish still sounds like fiction to me!