Who Let The Dogs Out In California? 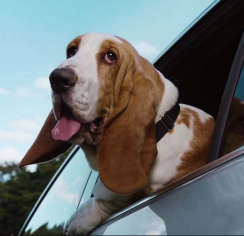 Dogs left in cars is nothing short of animal cruelty, particularly during the summertime. Dogs can incur critical health issues due to heat prostration. PETA has determined that canines can sustain brain damage or even suffer from heatstroke in just 15 minutes. Beating the heat is very difficult for our pooches, because they can only cool themselves by panting and sweating through their paw pads.

California is one of the early front-runners. . .

In Sacramento, animal advocate Michele Finerty told Fox News that people don’t “realize how quickly the animal can be overcome.”

“Temperatures can skyrocket inside a car,” due automobile's being constructed of metal noted Jennifer Kanady, another animal advocate.

This week, state lawmakers released a video testing how long they could handle sitting in a parked car on a hot day. California Assemblyman Steinorth, Assemblywoman Olsen and Assemblywoman Chang took the hot car challenge to promote AB 797.

Steinorth assured pet owners that this bill will not serve as a license to break windows, but rather as a means to help save dogs and other animals that might be experiencing critical situations of this nature.

"This is really a tool so you can save the life of an animal, and we're asking you to use your good judgment when you make that decision," said Steinorth.

Steinorth says under the legislation, a good Samaritan first must first check to see if car doors are locked and they must call police before breaking the pet free. They must also stay with the animal until law enforcement arrives.

What about other States?

So Readers, as the remaining presidential candidates head to California for the upcoming primaries, do you think any of them might add this legislation to their stump speeches? It certainly would be a great idea if this bill would not only pass in California, but also become model legislation to emulate by the other states in the union, don’t you think?

As of this posting, four states have passed animal protection laws, including Tennessee, Wisconsin, Michigan and Florida, with similar bills pending in New York and Ohio waiting approval — Governor Kasich, now that you're no longer running for president, we would appreciate it if you would sign that bill waiting for you on your Governor's desk, when you return to your state.