“There goes the toughest, most independent cat in the neighborhood,” observed one dog-walking neighbor as he watched "Pikachu" regally stalk across his front yard. He was absolutely right – the small white cat with a short dark “haircut” was the unchallenged Top Cat in the 'hood. 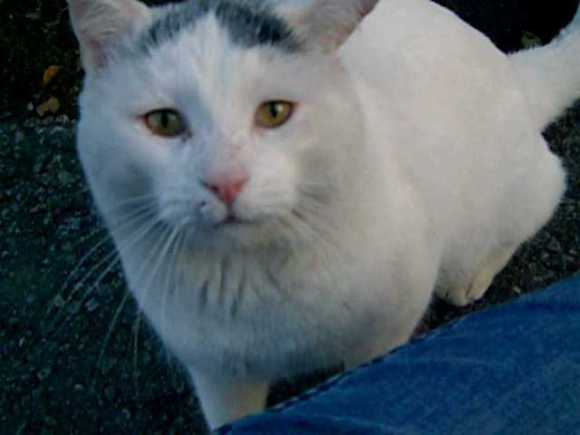 And he still might be... if and when he returns from the quiet country village where he was born and where he's spent the past few months. But we're getting ahead of ourselves... I first noticed this cat about three years ago. He didn't wear a collar. He obviously wasn't “fixed”. He appeared at unusual times and places; casually trotting along the path in front of our house when I'd look out the window at 1:30am, or gingerly walking across a neighbor's fence bathed in the light of a full moon, or luxuriously sprawled on someone's sun-warmed sidewalk only to shrink away when I'd try to approach him.

Time passed and my wondering grew. Whose cat was this, where did he live, and why did he keep popping up unexpectedly? My son said he was a stray but I had my doubts. Then one day, I spied him in a neighbor's yard bordering on a ravine – the time had come to check out The White Cat mano-a-gatto and find out just what his deal was.

As I walked out my front door, the cat had just reached the path that runs through our community. He avoided me but I managed to follow him and stay on his tail, er, trail. Sure enough, after a few minutes we had arrived in front of his house; distinguished by the woven mat and water dish by the front door.

Fortuitously, the cat's owner had just stepped outside and I was able to confirm a few things about him. His name was indeed Pikachu, which rather disappointed me as he seemed to deserve a much more dignified moniker. Also, he was a “village cat”... born on a farm in southern Ontario.

Even as a kitten, he displayed a strong personality his owners were loathe to suppress so these days he comes and goes as he pleases. Sometimes he'd be gone for two or three days, coming back with a pronounced limp or a scratch across his face. Other times I would find him sleeping against a sunny wall or stalking squirrels with fierce intensity. If a dog should show up, The White Cat would stand his ground, backing up his bravado with a snarl that would impress a mountain lion. I once witnessed a tiny Yorkie run up to the resting cat only to receive the aforementioned snarl accompanied by a swipe of a clawed paw across his muzzle. The Yorkie beat a very hasty retreat; The White Cat merely yawned and resumed his semi-slumber.

Impressed and intrigued, I made it my mission to befriend this atypical cat and adjusted my daily walks to swing by his house and the area around it where he usually could be found. As he became more familiar with me, The White Cat would come over to me and rub his head against my legs. He was marking me with his scent, as I later learned, and not merely being affectionate. As if! About all he would tolerate in return was a very tentative stroking on the back of his neck and on top of his head – and he'd barely abide even that, often scratching my pants-clad legs or gently nipping my hand. Yes, he left his mark in more ways than one: a pair of red, vampire-like pinpricks were my usual reward for just trying to be nice! 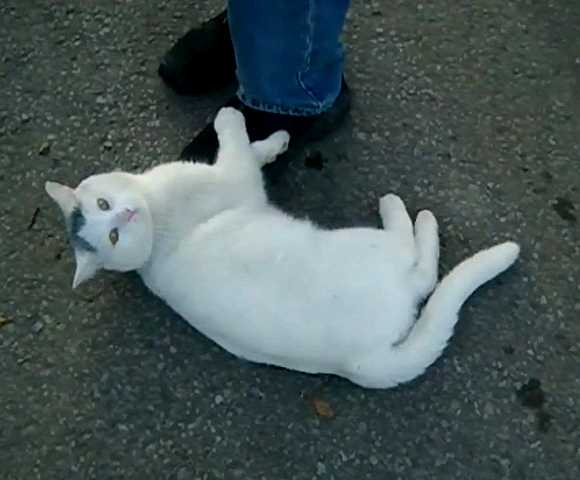 By this time it had occurred to me that our relationship had reached the limits of what The White Cat deemed acceptable: I wasn't a friend, more like a side-kick, and I'm OK with that.

While chatting with his owner last November, I learned that The White Cat's human family would be vacationing out of town over the Holidays and they would be leaving him with relatives (his and theirs) back in his home village. When he hadn't returned in January, they told me he would be away a while longer, maybe until spring – I guess he enjoys being Top Cat in that small village. That's where things stand at press time. Though spring has truly sprung and The White Cat may never return, at least I've enjoyed the experience of getting to know him.