When Pet Owners Separate: "What About Wally?" 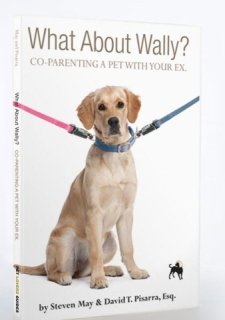 What About Wally cover, by Steve May & David Pisarra There has been a significant increase in pet custody cases in the first decade or so of the century, and at least part of the reason, according to a spokesperson from the American Academy of Matrimonial Lawyers, is that there are more same-sex marriages, civil unions and domestic partnerships. And don't forget, in many households, there are no kids; the pets are the kids.

When pet consultant Steven May filed for divorce, he had to work out custody of a daughter, 3 dogs, 2 cats, and a parrot.  His attorney, David Pisarra, had plenty of experience settling these kinds of custody cases and he, himself, was sharing custody of a dog with his ex.  Pisarra says that today judges are more sympathetic to couples wanting to share the company of their pets and one or both of the partners may want certain care and treatment provided for the pet when in the other's care.

May and Pisarra, who became friends and walk their dogs together, have co-authored a book based on their experience working with couples who want to separate but remain 'pet parents' to their pet. They developed a parenting plan that helps to overcome 'friction points' between the parents.  It's probably best, not to mention less expensive, to try to settle the pet parenting issues out of court.

And as I write this, I am thinking that maybe even pet parents who want to stay together might benefit from the book: What About Wally?  Co-Parenting A Pet With Your EX

Cool Stuff To Buy Humans
Health
Pet Care
Pets
Products for Pets
Stuff for Dogs
Send Pigs A Tumbling Down In The Pig Shot iPod Video Game
In Your Pool There Be Dragons . . . And Sea Serpents
Hedge(hog) Your Bet On A Backpack
Three Super Fun Mugs To Turn Your Kitchen Into A Zoo
Comments