When The Crow Became The Leader & Kemo Sabe, The Sidekick [Video]

The "crow" signified wisdom to the Native American Indian. Believed to have the faculty of speech, the crow was perceived as a "pathfinder" on hunting parities, and to adorn oneself with crow's feathers was a trend adhered to by a number of tribes. To stuff an actual crow and wear it as a headdress, however, has no historical antecedent in American Indian lore. That was -- until an American actor, with Indian heritage envisioned a new "Tonto" for the 21st Century.

While Johnny Depp is part-Cherokee, part-Creek Indian, Tonto from the radio and television series, The Lone Ranger was fictionalized as a full-blooded Comanche. Similar to how fairy-tales are being updated on TV

Jay Silverheelsshows today (e.g., Once Upon a Time, and Grimm), Depp took creative license by transforming the Jay Silverheels' persona of the 1950s.

In the soon-to-be-release movie, The Lone Ranger, Johnny Depp, co-starring with 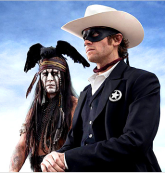 "The Lone Ranger" moviehis Kemo Sabe, Armie Hammer took visual cues that are more of an aggregation of looks versus any image of one specific Indian tribe.

“I’d actually seen a painting by an artist named Kirby Sattler, and looked at the face of this warrior and thought: That’s it,” noted Depp. He felt the lines of paint on the Native American’s face appeared

Kirby Satller like a cross-section of the man’s emotional life. “There’s this very wise quarter, a very tortured and hurt section, an angry and rageful section, and a very understanding and unique side. I saw these parts, almost like dissecting a brain, these slivers of the individual,” he said. "That makeup inspired me.” 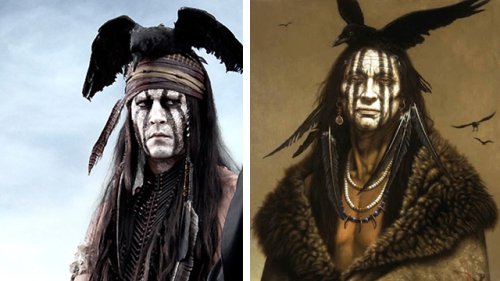 Johnny Depp takes inspiration from Kirby Sattler portrait
The painting also provided inspiration for Tonto’s "crowing" headdress. “It just so happened Sattler had painted a crow flying directly behind the warrior’s head. It looked to me like it was sitting on top,” Depp said, which led him to another eureka moment. “I thought: Tonto’s got a bird on his head. It’s his spirit guide in a way. It’s dead to others, but it’s not dead to him. It’s very much alive.”

So while imagery evolves, purists criticize Depp taking liberties. In a report titled “Why Tonto Matters,” Native Appropriations blogger Adrienne K. expressed the frustration echoed by some Native Americans over Depp’s characterization, saying there are too few authentic portrayals of Native people in pop culture to accept a highly fantasized version.

In defense, Depp has said his motivation to play the character came from his dislike as to how Tonto was relegated to subservience in the old Clayton Moore/Jay Silverheels' TV series. While the look may not be historically authentic, Depp wants Tonto’s character to be honorable and self-reliant. One might here him say: "Take a back seat kemo sabe --today, it's my turn at the spotlight!"

Depp, no stranger to disappearing into transfigurative characterizations, the likes of Edward Scissorhands or the Mad Hatter in Alice in Wonderland should be commended for taking on this challenge. Years from now, it will most likely be his portrayal that is referred to when telling the tale of a side kick that was a little bit more kemo sabe than people originally gave him credit for!

Hats (or crows) off to the Depp-ster for pulling it off, once again! 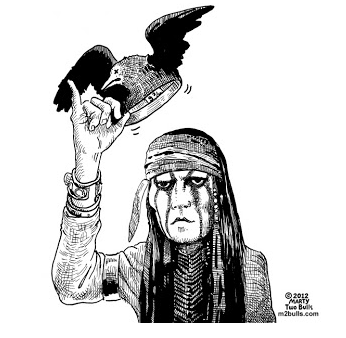