Matthew Crawley's character on Downton Abbey played by Dan Stevens tweets "Hound's Bum Abbey Time," to his Twitter followers, at the beginning of each episode aired in the UK. Only die-hard DA fans would have any inkling as to what that reference means? Similarly, most folks aren't aware that the iconic dog referred to in that tweet is just ONE of a several canines who reside at Downton Abbey (and the film location of Highclere Castle). But what are his or her names and why is so little known about the Labrador(s) who open each episode (bum-side first)?

Why? Because, if their dramatic lives were introduced to the public, their back-story would almost require another series, or at minimum, a reality show of their own. Similar to the class-struggle differences that exist between the aristocratic Crawley family and their servants, there are six labs (count them) in play at the fictional Abbey and the real Castle, that go by the names of Pharaoh, Isis, Roly, Ellie, Percy and Bella.

Two are actors, namely Roly and Ellie who have played the roles of 'Pharaoh' and 'Isis' over the course of the show's three seasons. Since these dogs are working actors, they are looked down upon by the real aristocracy of the manor. Lady Carnarvon, like her fictional TV counterparts thinks perhaps 'royal blood' should take precedence over the middle class likes of Roly and Ellie.

In an interview with the Daily Mail, Carnarvon revealed her Lab, Percy also had his nose out of joint having to cope with the presence of Pharaoh on the set. The hostility between the two canines was so marked, at one point the DA producers considered dropping Pharaoh's role from the script altogether. 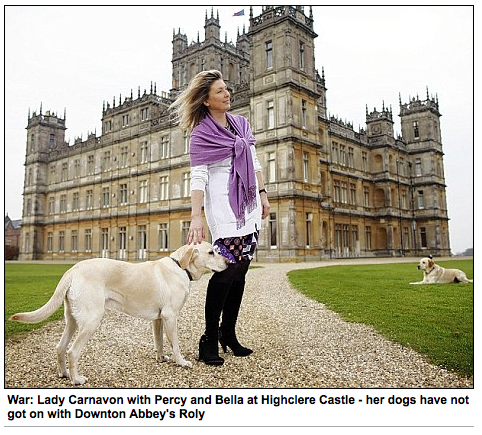 Lady Carnarvon said: ‘We have blonde Labradors named Percy and Bella, and what’s bizarre is they bring in their own Labrador. I haven’t got a clue why they don’t use ours, which are running up and down the stairs anyway."

‘Our male Labrador minds the Downton one enormously, so I have to say, “When is your dog in? Don’t turn up unexpectedly, because he does not like any other male dogs in the castle. He is very territorial," she added.

Now the plot thickens. In order to alleviate the class-war tension amongst the dogs, the DA producers 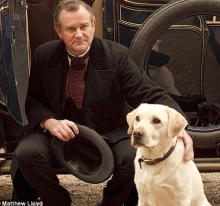 Hugh Bonnevile & Elliereplaced Roly with Ellie to initially play the part of 'Pharaoh.' But they quickly changed their minds after Hugh Bonneville, who stars as the Earl of Grantham, said eagle-eyed fans of the show would instantly spot the differences between the original male dog and its female stand-in.

To remedy the potential backlash from DA fanboys and fangirls, instead, viewers have now been informed that Pharaoh has died (after all, that's a common occurrence in the Abbey household, for anyone who follows the show) and the Crawleys have acquired a replacement hound, who isn't a hound at all - she's instead, a female lab, named Isis.

So, if I haven't confused you altogether with the names, owners and who's portraying whom, the question now arises, since Isis is the now the reigning First Dog of the Manor, shouldn't Dan Steven's (aka Matthew Crawley's) current tweets read: "Bitch's Bum Abbey Time!"  (and after all, shouldn't the Crawley family have given Pharaoh a proper burial - if for no other reason - than to have the actors change back into their black mourning clothes - just, one more time?) 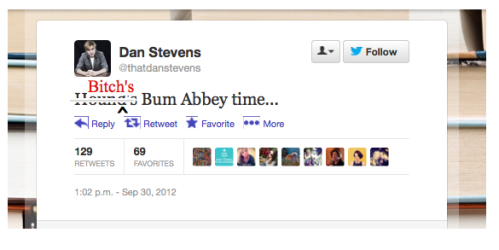 Ball Pit Full Of Ferrets! The Animal Video Of The Day!!!

Spiders On Drugs! The Animal Video Of The Day!!!

Dogs and Fireworks -- The Amazingly Stupid Bonus Animal Video of the Day!!!

Deer Farts on Camera... The Flatulent Animal Video of the Day!!!
Comments