The discovery of the ancient lair of a unicorn described in Korean history has been announced by archaeologists at the History Institute of the DPRK Academy of Social Sciences. The news was publicized not by The Onion but by KCNA, the official news agency of the government of North Korea.

“Korea's history books deal with the unicorn, considered to be ridden by King Tongmyong, and its lair,” explained Jo Hui Sung, director of the Institute. “The Sogyong (Pyongyang) chapter of the old book 'Koryo History' said that Ulmil Pavilion is on the top of Mt. Kumsu, with Yongmyong Temple, one of Pyongyang's eight scenic spots, beneath it.” Mention of Yongmyong Temple is a crucial point because “the temple served as a relief palace for King Tongmyong, in which there is the lair of his unicorn.”

Sure enough, about 200 meters from the Yongmyong Temple (above) in Pyongyang City's Moran Hill (yes, Moran Hill) the archeologists uncovered a rectangular rock carved with the words “Unicorn Lair”... presumably in Old Korean script and not English, because that would be really weird.

The researchers estimate that the script was carved during the heyday of the ancient Koryo (or Goryeo) Kingdom which existed from 918 AD to 1392 AD. Alas, no remains or other residue of the king's unicorn have yet been found in the purported lair though work at the site is ongoing. 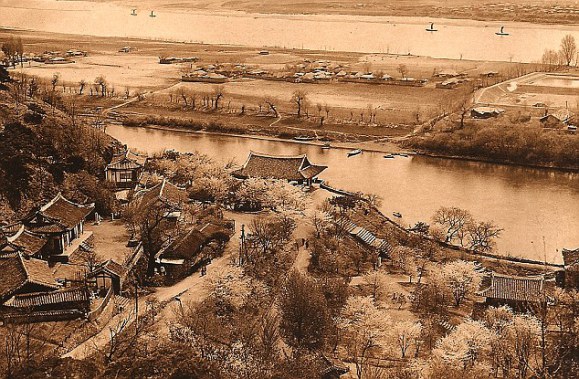 King Tongmyong holds a firm and respected place in Korean history as he is credited with founding the Koguryo Kingdom (277 BC to 668 AD) which encompassed most of modern Korea including the cities of Pyongyang and Seoul. Both the king's name and the legend of his unicorn crop up in the chronicles of Korean history, most recently, according to Jo Hui Sung, in “the old book 'Sinjungdonggukyojisungnam' (Revised Handbook of Korean Geography) complied in the 16th century,” in which historians of the day “wrote that there is a lair west of Pubyok Pavilion in Mt. Kumsu.” This implies, albeit indirectly, that unicorns existed in the historically recent past and that they lived in lairs.

Lost in all the unicorn hype was the real point of KCNA's article: “The discovery of the unicorn lair associated with legend about King Tongmyong,” states Jo Hui Sung, “proves that Pyongyang was a capital city of Ancient Korea as well as Koguryo Kingdom.” What he did there... can you see it? (via Lebanon Times)

The Dickin Medal: Top Honors For Animals In War
Comments