What is it about zoos that brings out the best in animals but the worst in people? Zoo managers have tried to strike a balance between nanny-like scolding and gentle chiding to keep visitors on their best behavior. The results can be seen in this illustrated review of the top 10 funniest zoo signs... bars none. (Funny zoo sign image via pxhere)

Please do not feed or interview the animals... sound "bites" are the least of the possible consequences. You can drop the mic now. (Funny zoo sign image via Yortw)

9) Nobody Walk the Dinosaur

Someone steal this sign from the Bedrock Zoo? Someone call President Trump, we need some deregulation and we need it NOW - we paid us our money, dangit, and we's gonna ride one o' them "longhorns"! (Funny zoo sign image via DailyLolPics) 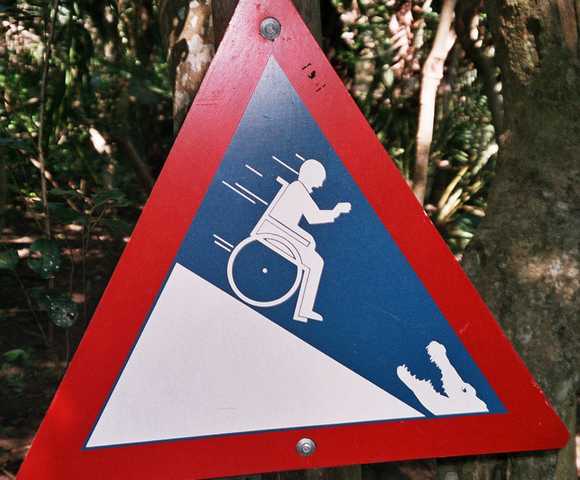 Indeed, crocodiles are equal-opportunity, all-access predators and a South African zoo wants everyone to be aware of that fact. One supposes the zoo should be congratulated for installing a ramp for the handicapped but before doing so, check to see just what kind of ramp it is. (Funny zoo sign image via James Michael Hill)

OK, just what the heck is going on at Tampa's Lowry Park Zoo?? Seems like a passive-aggressive way to tip surly zoo employees if you ask us. As for the warning, you don't want to be on the receiving end when annoyed animals start flinging weaponized monetized crap in your direction. (Funny zoo sign image via Eric Kilby) 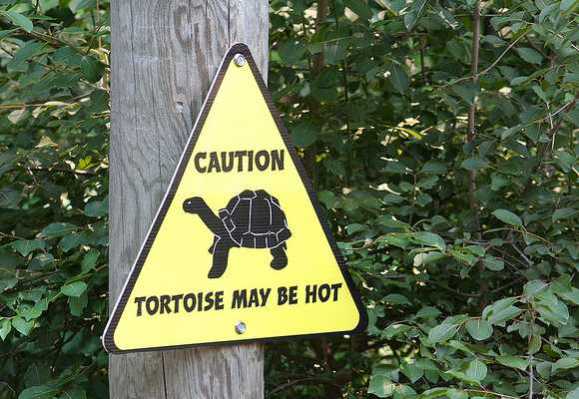 Either it's mating season at the turtle exhibit or the Galapagos Islands are having a heat wave... a tropical heatwave at that. On the other hand, if your tortoise is hot, you just might be a redneck. (Funny zoo sign image via AxsDeny)

Most zoos post signs asking visitors not to feed the animals. Then there's Thailand. If you didn't think the Thais were hardcore, think again. Also, it would seem Thai zoo animals are temptingly tasty. (Funny zoo sign image via Amusing Thailand)

That's the thing about suddenness, it can happen... just like that! Thankfully, the staff at a Chinese zoo have kindly posted signage indicating the consequences lest (lest?) visitors cross any railings. Whew, those railings must be really sensitive. (Funny zoo sign image via TaQpets)

3) The Other Angry Birds

Excuse me, but “Aggressive Cranes”? Really? What kind of cheap dimestore zoo is this anyway? Is the next exhibit the Killer Rabbit of Caerbannog? Things could be worse – the sign could read “Passive Crane” or even “Passive-Aggressive Crane”, which actually IS scary when it stops taking its meds. (Funny zoo sign image via justgrimes)

Either the Chester Zoo has begun installing pubs to boost revenue, or the Monkey House is way overdue for a cleaning... maybe both! (Funny zoo sign image via Dunnock_D)

Maybe someday we “highly evolved” humans can visit zoos without having to be told via signage what not to do. Maybe the fact we need such signs now means we're not quite ready to be our animal brothers' zookeepers.