Animals are always really either cool or scary in movies. Take Old
Yeller, for example. Started out really cool, ended out really scary.
Made me cry.

But that's neither here nor there. Fictional creatures are awesome and we all pretty much want them to be real.

Okay... Let me start right off the bat by saying that the following critters from fictional films and television shows are MY opinion. I don't want to get into an argument with someone over my choices--though I will be happy to discuss any of these "pets" that I've missed.

As these are my opinions, I figured I'd lay down some ground rules:

1. None of these "pets/animals" are intelligent in a human-like manner. You won't find ALF or Chewbacca here. They aren't pets--they're sidekicks.

2. I don't think that these "pets/animals" necessarily have to be alive. They could be robots or zombies... etc.

3. These aren't in any particular order.

All righty then. Now that we have that set, let's get the ball rolling; and I'm starting with MY personal favorite:

If you have not seen How To Train Your Dragon, go out and rent it (or buy it) now. What I thought was going to be a throw-away cheezy CG flick ended out being thoughtful, fun, poetic, and beautiful. Truly a great movie.

And Toothless the dragon? 100% my cat (Buster), but much larger and with wings. How could I not love that character?

The Cave Troll from Peter Jackson's excellent adaptation of J.R.R. Tolkien's The Lord of the Rings is a perfect example of guys I knew in college. They would get drunk, then get in bar fights in which they were horribly out-numbered. Of course I was stuck in the middle (rather like one of the Hobbits), and would usually end out with a bloody nose or a black eye.

Upon further thought on my past escapades, I'm glad to be alive...

Call me a sap, but I love Simon Wincer's 1993 film Free Willy. While I generally go for more somber fair (I think my other favorite film of that year was RoboCop), this movie re-awakened my love for cetaceans. And, if he didn't eat you, Willy would be pretty fun to hang with.

While I couldn't find any decent video of Muffy the Daggit from the original Battlestar Galactica, I was able to find footage of the original suit after being refurbished. Originally a monkey went in that suit and wandered around somewhat lost (probably due to the fact that he/she couldn't see out of those eye holes), looking sort of like a robot dog.

What would Lancelot Link, Secret Chimp think about that? 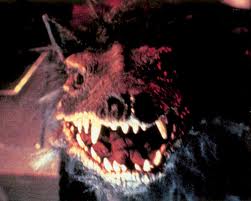 Once again I was thwarted in finding any video of this critter. Suffice it to say that Klingon Commander Kruge in Star Trek III: The Search for Spock had a monster dog thing that I would be very hesitant to pet. What confounds me is that Star Trek fans (of which I am one) have not given a name to this creature. It may be in the novelization of the movie--but I, unfortunately, do not have that and could not find a name online...

While I have an affinity toward the older Ray Harryhausen effects-driven Clash of the Titans, I must admit to having enjoyed the 2010 version quite a bit. It was sort'a like they took Harryhausen's neat white horse and turned it into a rockin' ride via Pimp My Horse. All that this steed needed was flames painted on his flanks.

You should be able to tell by now that I want to have a pet that will carry me airborne. The Ikran from James Cameron's Avatar are incredibly realized fictitious creatures. And I want one. But I can guarantee that I'll leave a nice spray of vomit while hurtling straight down the side of a cliff. Nobody better be behind me...

Those of you who have not seen Farscape are missing out. One of the best Science Fiction / Space Opera series ever made, this show managed to push every emotional button. Great stuff.

Essentially a DRD is a little maintenance robot that provides services and repairs for Moya, a giant bio-mechanical creature known as a Leviathan that serves as a space vessel. They are somewhat independent and rather like dogs. Some of them even display a level of intelligence, such as 1812 in the video above--named by Crichton (played by the awesome Ben Browder) when he is stranded on a dying Leviathan. 1812 can even sing the "1812 Overture." I'm a huge geek--so I have a little DRD action figure sitting on my computer. I only hope it helps out the next time the hard drive crashes.

See... I told ya that not all of my "pets" would be flesh and blood. It is no secret that Iron Giant is my second favorite movie ever. EVER. Only Lord of the Rings beats it. I endeavored to find a scene that wouldn't spoil anything while still showing the joy of this film--and I think I was successful.

Who doesn't want a giant robot??????!?!? I mean, sure... it may cause some issues with the neighbors, but I think that having a giant robot that does whatever you want would pretty much take care of that issue... right?

And, by the way, he fits in more as a pet than a sidekick because he's a bit damaged when he knocks his noggin upon crashing on Earth. Once that gets fixed... well, that's another story.

Okay... I'll probably get slammed for this one. But what's not to love about a tiny, purring ball of fluff? Tribbles exist to get rubbin's--sort'a like cats but without legs... or eyes... or ears... or... well, heads. But, like Gremlins (which will be on another list), you don't want to feed them.

Like it or not, "The Trouble With Tribbles" by David Gerrold is one of the most popular episodes of Star Trek. But how did Tribbles multiply? I mean, c'mon. We get the idea that they could crawl up walls, but the only time they were in movement was when they fell on Kirk's head or got mad at a Klingon.

So... I'm sure I missed some critters (or that they landed in 2nd place on my list). Any suggestions?

If you like this article, will you please recommend it? Please post it or  tell folks about this article?