'Tis The Season For Stressed Out Pets! A Remedy To The Rescue 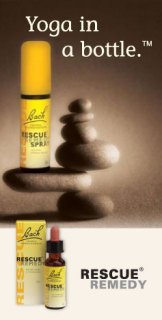 Rescue Remedy by Nelsons Bach Whether you're bringing home a new pet this season or just trying to calm down the ones that are already stressed out by guests, new no-no's, or just your own anticipation, there's a remedy to the rescue!

It's a natural floral remedy that holistic vets have been recommending for years called Rescue Remedy, a 60 year old formula that was actually created for humans.   Recently, Nelsons Bach, the British 150-year-old parent company of
homeopathic stress treatment, Rescue Remedy, made a special formula,
Rescue Remedy Pets, which even Martha Stewart uses to calm her horses!

Rescue Remedy is a homeopathic blend of 38 floral extracts, all of which treat individual symptoms of stress. These same flowers are used in the preparation of Rescue Remedy Pets, but for pets sensitive to alcohol, this blend is prepared in an alcohol-free base. 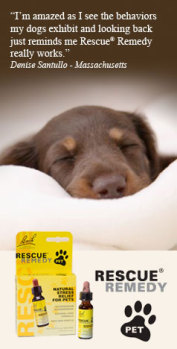 Rescue Remedy Pet by Nelsons Bach Rescue Remedy Pets contains beech, chicory, heather, honeysuckle, walnut, and water violet flowers among its 38 calming remedies.  But each flower has a specific purpose.  For example, dominant dogs would benefit from the vine flower included in this blend, but would probably benefit as well from the holly flower which is de-stressing for jealous dogs.

Horses pick up moods very easily from their owners and may be sad, sometimes due to a loss of a companion horse.  Clematis, elm, gentian, honeysuckle, wild oat and wild rose extracts in Rescue Remedy would be helpful to both horse and owner.

Cats who experience nervousness around visitors and those who've been abused or terribly frightened could benefit from mimulus, rock rose, star of Bethlehem, and water violet, among other ingredients in Resue Remedy should be eased.

Rescue Remedy Pets claims to have an immediate calming effect on your pet in such events as...

Nelsons Bach recommends the dropper format, as it can be applied in the mouth, on the nose, in the ears, or in pet food or water.  The company claims it is suitable for all pets, even reptiles and fish.

Rescue Remedy Pet, as well as human versions of Resue Remedy are available at Amazon.com

It's Hard to Be a Cat at Christmas -- The Bonus Musical Animal Video of the Day!!!
PetsLady's Pick: Surprised Christmas Morning Dog Of The Day
Invite Santa's Kitten To Hang Out On Your Christmas Tree
How To Decorate Your Aquarium For The Holidays
Comments