Capt. John Coombs of Shoal Cove West, Newfoundland and Labrador, thought he was seeing triple when he pulled an odd lobster out of one of his traps. Turns out his vision was fine and the lobster was odd: odd-limbed, that is!

According to scientists, segmented animals such as lobsters and insects will occasionally display a genetic mutation that results in repetition of one or more body parts. 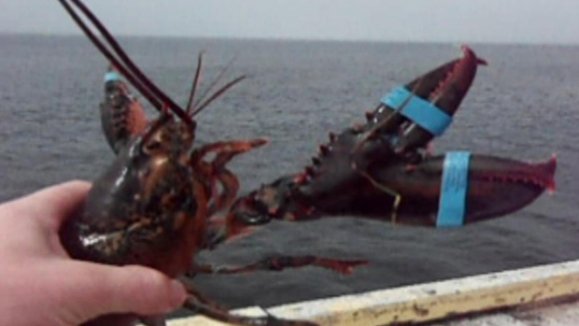 The fact that the three-clawed lobster caught by Capt. Coombs was of marketable size and weight indicates the mutation did not hinder the lobster's ability to hunt and eat. Indeed, the third claw is both useful and mobile; something lobstermen need to be aware of when banding their catch!

One might think a three-clawed lobster would be both rare and valuable but that's not the case. Though definitely strange and unusual, three-clawed lobsters are not all that uncommon, even in areas far from nuclear power plants, and they lack the intrinsic beauty of curiously-colored blue, orange, yellow, white or calico lobsters.

What does it all mean for our three-clawed thermidor? Nothing good, unfortunately, and that goes beyond not giving him (or her) a cute nickname.

An extra claw just means more marketable weight for Capt. Coombs and more meat on the plate for a seafood restaurant patron though if you were the latter, would the sight of a mutant lobster in front of you cause a loss of appetite? (via CBC and Pizza Therapy)