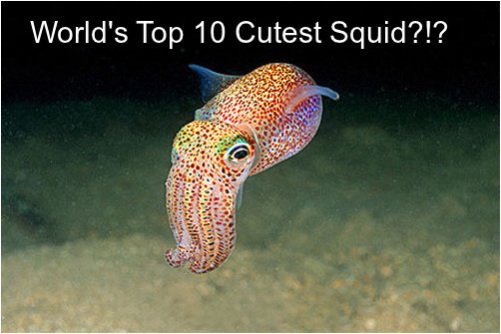 Squid Vicious? No way, punk! These 10 cute squids have got eight arms to hold you, they're suckers for affection and you don't have to be a Sperm Whale or a seafood aficionado to enjoy them. 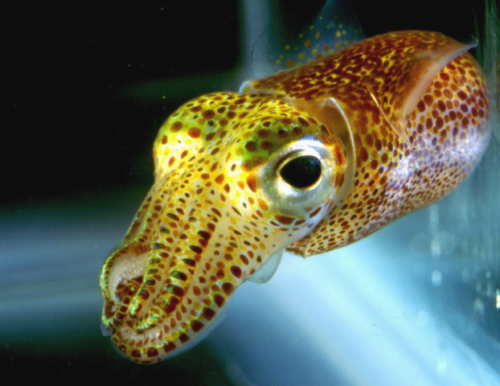 This cute li'l critter is a Hawaiian Bobtail Squid. He's just checking you out but make no mistake, his tentacles are tempted to tickle you! (cute squid image via Justin and William Ormerod/courtesy Margaret McFall-Ngai)

The Striped Pyjama Squid has two cute little “hand” thingies reaching upwards behind its eyes. Awww... just be glad they're not reaching for YOU! (cute squid image via Planet Earth)

This l'il gal doesn't need to wear jewelry... she IS jewelry! Like our first cute squid this is also a Bobtail Squid though she hails from the Philippines, far to the west of Hawaii. Depth unknown, possibly 20,000 leagues. (cute squid image via Klaus Stiefel) 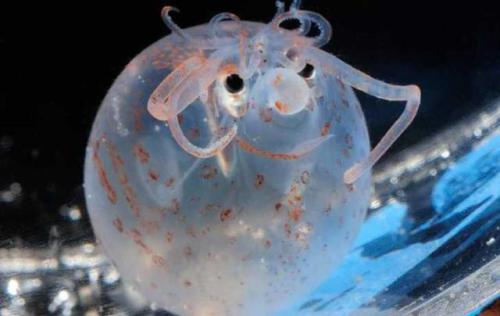 Don't fear the Reaper... not this one, at least. The Piglet Squid depicted above only looks like a piglet though it most definitely is a squid. It also only looks like it's smiling but for lovers of Teh Kyut that's more than close enough. (cute squid image via Wikipedia/Taniab)

We just want a rock to wind a squid around... a one-hit wonder from They Might Be Giant Squids. Seriously tho', this so-called "sleepy squid" seems quite confident no one nor no thing will ever dislodge him or her from this rough rocky perch... actual Ocean Perch not included. (cute squid image via Dave Fayram)

Call Me "Dumbo" To My Face!

Squid, Cuttlefish and Octopuses - Octopi? - are all members of the Cephalopod family and here's one that seems to fit all three designations. The so-called "Dumbo Octopus" got its moniker by virtue of its elephantine "ears", shown above as the creature prepares to launch itself off the ocean floor. As for a trunk, well, are EIGHT trunks enough for ya? (cute squid image via NOAA Photo Library)

“I Do Declare, Mah Southern Dumpling”

They say the Southern Dumpling Squid is “more commonly seen at night.” The most common thing WE see at night is, er, darkness. In related news, somebody's been beaming searchlights into the sea off Australia. (cute squid image via Klaus Stiefel) 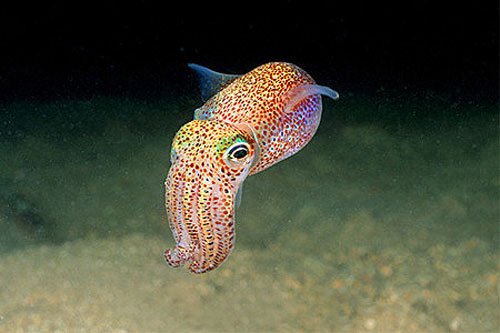 It knows all, sees all, and evidently it's all right with it – all that's missing is an exaggerated wink and a whispered “Your secret is safe with me... for now.” (cute squid image via Florida Museum of Natural History)

You've got eight arms, I've got eight fingers (not counting thumbs)... seems like squids and humans have something in common, at least. Mind you, there's that whole "breathing air vs breathing underwater" thing, which reminds us: put that critter back where it belongs, and then go wash your hands! (cute squid image via Nature-Pix)

From its porcine “nose” (actually a siphon) to the spiky mohawk hairdo (actually its tentacles), this Piglet Squid just screams “CUTE!!” That is, it would if it could, which it can't. You try talking hundreds of feet below the surface of the ocean while swimming upside down – the result in that case will be anything BUT cute. (cute squid image via IAmSciArt)

It seems there's a lot more to squids than meets the eye, and their lives and lifestyles are much more varied and interesting than most would imagine. We couldn't imagine actually BEING one, though fans of Adult Swim's Squidbillies might disagree. Don't fret, Appalachian Mud Squid wannabes, thank karma for reintarnation! (cute squid image via Nathan Rupert)