The Tale Of The Crow And The Kitten

The story of the unusual bond between a crow and a kitten began back in
1999 when the kitten turned up in the yard of Wallace and Ann Collito.
It was so small that at first they thought it was a rat. Once they
discovered it was a 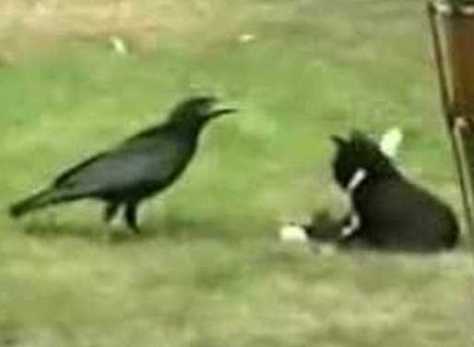 Cassie and Moses (You Tube Image) kitten they figured that someone had thrown it over
the fence of their Massachusetts mobile home park. They were worried
about the cat's welfare, right up until they noticed that she already
had a caretaker -- a crow.

The Collitos dubbed the kitten Cassie and the crow Moses. They would watch in amazement as Moses would pull tidbits out of the ground to feed to Cassie, just as though she was a chick. He would place the food in her mouth. He would protect her from other animals and keep her out of the street. Even when the Collitos tried to approach Cassie they were rebuffed by Moses.

It all seemed so incredible that they weren't sure anyone would believe them, so they started filming and photographing the pair together. 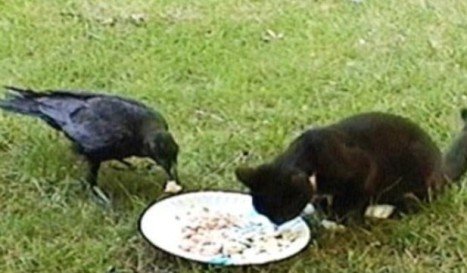 Cassie and Moses (You Tube Image)Eventually they were able to coax Cassie indoors and she became acquainted with the comforts afforded an indoor cat and she would spend her evenings enjoying the company of the humans. Each morning though would find Moses pecking at the back door looking for her and the Collitos would let Cassie out to play.

The couple watched the pair play and wrestle together for five years until one day Moses just stopped showing up. Since crows only live seven or eight years they assumed that Moses and passed away. Ann also passed away in 2006, so now it is just Cassie and Wallace taking care of one another in their home.

The story of Cassie and Moses was chronicled in a children's book, Cat and Crow, by Lisa Fleming. The book 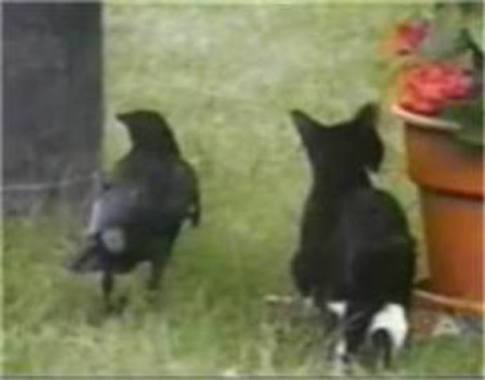 Experts who have viewed the videos suggest that Moses was most likely a female who had lost either chicks or eggs recently when she discovered the starving kitten. Still in mother-mode she felt the need to mother the kitten.

There is no word on how well a diet of insects would have served the kitten. The Collitos added to Cassie's diet -- and apparently fed Moses too -- from what the video shows.

It does leave one to wonder though -- did Moses ever try to teach Cassie to fly?