A Street Cat Named Bob: A Tale Of Rescue And Redemption

A famous saying from the Talmud says that he who saves a single life
saves the entire world. That means that Bob, a stray ginger tabby cat in
London, has saved us all. It happened when he met James Bowen, a down
and 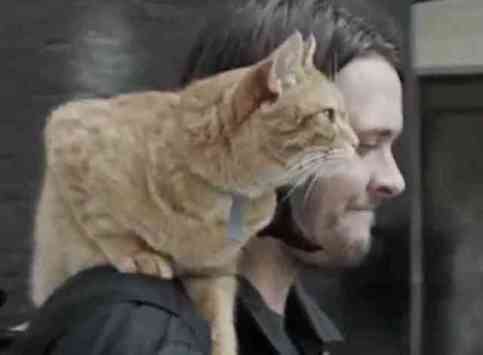 James Bowen and Bob (You Tube Image)out junkie who had been living rough on the streets -- a different
kind of London stray. Bowen claims that it is because of Bob that he has
been able to turn his life around -- in other words, save it.

Bowen had finally managed to get himself a small flat in a government sponsored apartment building in London. One day he found a tiny ginger kitten heavily infested with fleas curled up in the hallway. Bowen took him in, scrounged enough money for veterinary treatment and named him Bob (Bob Cat, get it?). Bob had found a forever home.

Bob provided the love and companionship that Bowen hadn't been aware was missing from his life.  The kitty love was like a lifeline that had been thrown to him. 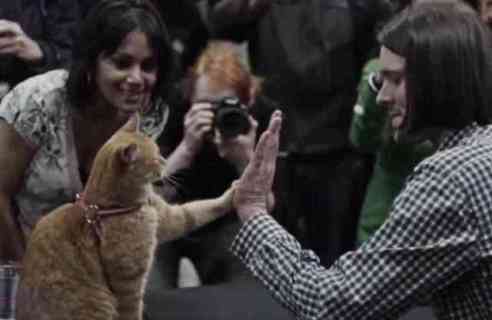 James Bowen and Bob at a booksigning (You Tube Image)Bowen had been scraping up a living as a busker playing his guitar around the famed London Covent Garden. When Bob started going with him every day Bowen actually started to make a living.  Bob's presence on his shoulder drew people to him and made them more likely to drop a few coins into his guitar case.

There have been people who have wanted to buy Bob. There have been those who have said that Bowen must have drugged the cat to get it to perform. Bowen won't part with Bob for any amount and says that Bob just loves performing. The two just seem to be something of an extension of one another now.

The partnership has helped Bowen clean up his act and really turn his life around. He penned a book entitled "A Street Cat Named Bob" about their journey together. The volume became an international best seller.  The team behind the movie "Marley and Me" is negotiating the rights to make their story into a movie.

These days the pair rarely perform on the streets. Their days are filled with charity work and book signings. At 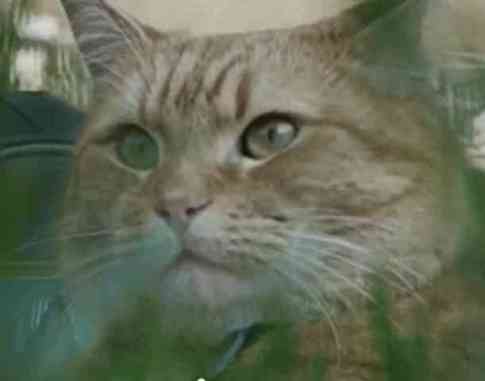 Bob (You Tube Image)book signings Bob can be seen sporting one of his many scarves that fans have sent him. He and Bowen will occasionally share a happy high-five to thrill the crowd.

The magnificent moggy is milking the attention for all it is worth, like any good kitty. In the wake of their celebrity Bowen and Bob have penned two additional books -- "Bob: No Ordinary Cat" and "The World According to Bob."

“Bob is such a smart little man. He opens doors. I have
caught him using the loo in my flat. Most cats are loners, but Bob loves
hanging out with me. We're partners and best mates." Bowen explained.

Grumpy Cat, The Richest Feline In The World Dies