Residents of Xinxiang may have gotten used to having a medical research center on the edge of town but when a pink-skinned, piebald, scraggly-haired beast was spotted roaming the streets early one morning, it was easy to jump to some frightening conclusions.

“The pink skin makes it look just like pig gone wrong in some sort of genetic experiment,” stated one witness to local police. Others likened the creature to a miniature horse, based on the tufts of pale hair sprouting from its head and tail. 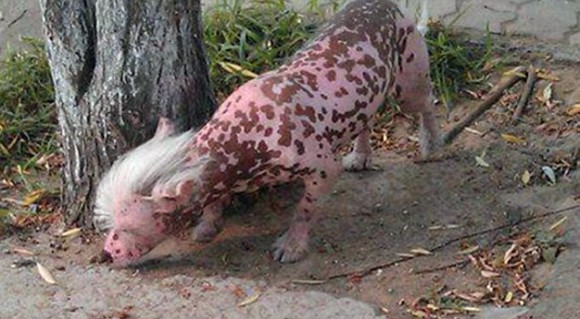 Most shocking was the animal's bright pink skin highlighted with a plethora of brown spots – definitely something different from the usual large color blotches common to domestic pets and livestock.

Police were called, luckily before any of the neighborhood residents could take matters into their own hands. Upon examining the creature, officers reassured onlookers that it was NOT the subject of a genetic experiment and had no connection to the medical research facility. 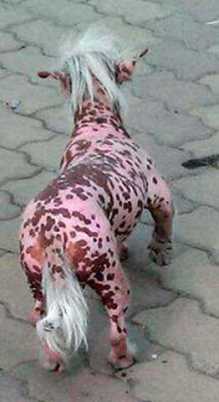 It turned out instead to be a dog: a Chinese Crested hairless to be exact! “It is definitely a dog,” confirmed a police spokesman, “and quite an expensive one at that.” The lack of body hair would explain the pink skin; being out in the bright sun had possibly given it a case of sunburn.

Though Chinese Cresteds are native to China, they're by no means common and the expense required to purchase and maintain them usually means they're kept indoors. Let's hope “Pinky's” owner contacts authorities and gets his or her pet back soon! (via METRO)

News Stories
Christmas Eve -- The Time When Animals Talk
When Dolphins Attack: Furious Flipper Bites The Hands That Fed Him
"Return-A-Pet" Franchise Alleged To Be A Scam
Biting Satire Phases Out Humans To Save The Planet
Comments