“So Happy Smiling Cat” - A Feel-Good Feline Fur Sure! 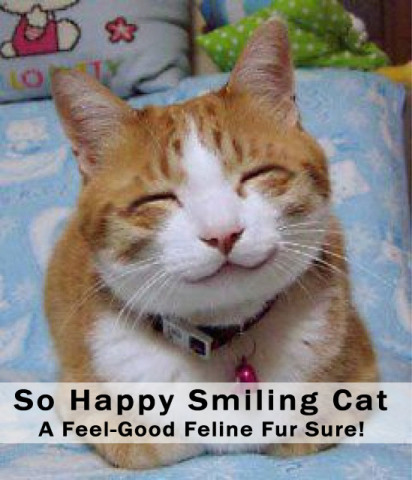 Quietly satisfied and beaming exultantly with joy, “So Happy Smiling Cat” hails originally from Japan but for the past couple of years his real home has been the Internet.

The mellow fellow's name is Taro-tan: a kinder, gentler version of “Taro-chan” used much in the same way as Otaku idol Shoko Nakagawa's name has been adoringly shortened to “Shoko-tan”. Taro is a boy's name in Japan and that's about as much as we know about him.

It's not that Taro-tan or his owner, Yumi Kimura, are publicity-shy or anything. Taro-tan doesn't have his own blog (a missed opportunity?) and there's only one image of him in Kimura's photostream at Flickr where she posts under the pen-name Puamelia. 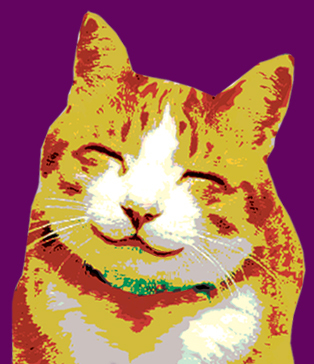 A rough translation of the caption Kimura provides for the pic of Taro-tan reads “Image from my iPhone, I wish it was better quality. Friend of a friend's house cat. Was just a happy moment.”

Indeed it is: Taro-tan's endearing grin is anything but toothy and his eyes are nearly squeezed shut from joy (or something that appears to us like joy). His body language indicates comfort and contentment, as if he would be pleased to maintain that position indefinitely.

Speaking of which, twin statues of a sweetly smiling Taro-tan positioned outside a shrine, beside a temple's altar or even flanking a cat-lover's front door wouldn't raise an eyebrow. Would a stuffed-animal reproduction of Taro-tan in situ sell? You know it would. Word to Yumi Kimura: order up a few hundred plush Taro-tans and start up an online Taro-tan store. The Internet made Taro-tan famous... it may also make him (and you) a cat-load of yen.