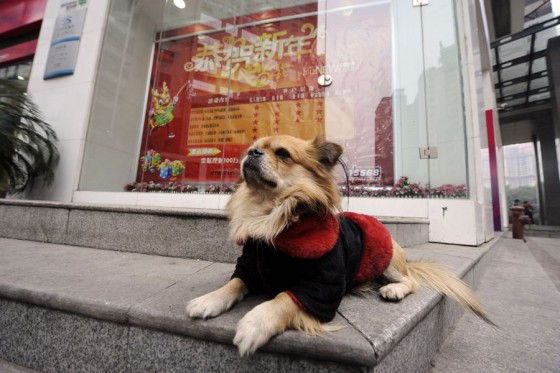 Wang Cai, a former homeless pooch from Chongqing, China, displays an unusual degree of loyalty. From 9 to 5 on weekdays, Wang Cai waits outside the Minsheng Bank building, patiently counting down the minutes to quitting time and a daily reunion with his owner. One might think Wang Cai's getting a raw deal here but appearances can be deceptive. His current owner found him wandering the mean streets of Chongqing four years ago and decided to take him in – an arrangement that appealed to Wang Cai, and why not?

He's regularly fed and kept clean, he has a warm, cozy bed to sleep in, and his owner trims his hair to suit the season. He also wears a spiffy winter dog jacket both to keep away the chills and indicate to bystanders that he's not just a wandering stray. Perhaps Wang Cai feels some separation anxiety each morning when his owner leaves for work downtown, because he's not content to mind the home front while she's gone. Instead, he follows her to the Minsheng Bank building, picks out a place from which to keep watch, and does just that... for the next 8 hours!

Observers have noticed Wang Cai of late and not only because of his fashionable duds. Once he finds a suitable waiting spot he sticks to it, refusing food from passersby and chasing off any other dogs who try to squat on his concrete turf. You can watch Wang Cai in action (or “in inaction”, as the case may be) on this video posted to YouTube. A different video of Wang Cai posted at YouKu, China's equivalent to YouTube, was an instant hit with Chinese netizens racking up 1.3 million views within 24 hours!

Wang Cai's constant and steadfast loyalty has evoked comparisons to Hachiko, a Japanese Akita dog whose statue now stands outside of Shibuya Station in downtown Tokyo. Hachiko used to wait for his owner at the same time each day, even after the man suddenly passed away at work in May of 1925. Every day thereafter for nearly 10 years, Hachiko would wait fruitlessly at Shibuya Station for his deceased owner, then silently return to the family home. By 1932 Hachiko had become somewhat of a celebrity and in 1934 a bronze statue was erected outside the station – with Hachiko in attendance. This ultra-loyal pet continued his daily duty until his own death from cancer in March of 1935.

While Wang Cai has quite a few years to go before matching Hachiko's feat, the simple fact that he waits for his owner in a similar manner shed light on the astonishing degree of loyalty dogs as a species feel for their human companions. The very least we can do is to return the favor in kind. (via ChinaSMACK)

Live Key Chains For Sale In China
Are Alien Ants Behind The USA’s Political Campaigns Or Is It Us?
Comments