"Cities" which is the first global meeting of wildlife enforcement networks that highlights the importance of cross-border cooperation and combats transnational organized wildlife crimes met just recently in Bangkok. Some 5,000 animal species and 29,000 plant species receive some level of protection under CITES, now in its 40th year.

According to the BBC, when this body demanded added protection for sharks, "campaigners hailed the move as 'historic' and said the vote represented a major breakthrough in the sharks' status.

Reports estimate 100 million sharks are killed each year in commercial fisheries, and with a shark's slow reproductive systems, populations are unable to keep up with this rate of over-fishing. The oceanic whitecap, three varieties of hammerheads and the porbeagle are all said to be seriously threatened for extinction if this level of commercial consumption continues.

These shark species have declined dramatically in recent years, as the trade in shark fins for soup has grown as a delicacy in East Asia. Shark supporters have been attempting to get Cites to protect these species since 1994. But there has long been strong opposition to these actions from China and Japan, as has been the case with the commercial exploitation of dolphins in Taiji (for more on this topic see my previous post, titled: "Just The FAX Might Save The Dolphins Of Taiji.")

Internationally, the growing opinion by other nations is aiding the cause however. Experts in South

Dr. Colman O'CriodainAmerica for instance have come to understand that sharks are more valuable alive than dead. "They've come to realize, particularly for those with hammerhead stocks, the tourist value of these species and the long term future that will be protected by a Cites listing," said Dr. Colman O'Criodain from WWF International.

"Because of their role as apex predators - (sharks) are the tigers of the sea - their extinction will have profound and devastating ecological consequences. This is even before one can consider economic value of shark-diving and other forms of tourism, which is much greater than their value as food products," notes Criodain.

While Cities' decision to protect sharks can still be overturned, the court of public opinion might be enough to make their recommendation a mandate. The macabre method fishing called "shark finning" might be enough to shift the naysayers in favor of "saving the sharks.' Presently fisherman catch sharks, slice off their fins and toss the flipperless body back into the ocean to die, thereby saving storage space for the priciest appendage.

This practice has got to stop -- as was suggested by StateImpact's David Barer in his post, reminiscent of the now-classic Seinfeld sketch, titled: "No Soup For You!" Yes, perhaps 'humor' can get the point across in a way that's more palatable for those obstinate commerical fisherman (you know, "a spoonful of sugar makes the medicine go down.")  Worth a try . . .Lord knows, the Sharks from the Shark Tank use enough of it when they choose to let contestants off the hook! 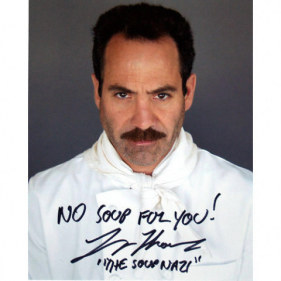 UPDATE: March 11, 2013, AllAfrica.com: After I had finished this post earlier in the day, later in the afternoon, the folloiwng statement indicated that this proposal was approved and passed: The United States, Brazil, Colombia and other nations mutually supported
the proposal passed at the conference of the parties for the Convention
on International Trade in Endangered Species of Wild Fauna and Flora
(CITES).