It's a little known fact, especially since they won the Super Bowl, but in actuality there is no bird in ornithology known as the seahawk. Multiple sources, including the Seattle Seahawks' own website admits that seahawks don't exist.

Ospreys on the other hand do. Those are the birds found throughout the Puget Sound area of Washington which are also known as fish eagles or fish hawks. Ospreys are the only member of the hawk family that are exclusively fishers.

There are similarities between the osprey and the Seattle Seahawks team. They have dark-colored slashes under their eyes, similar to the 'eye black' grease applied under the eyes of football players to reduce the sun's glare. The eyesight of an osprey is also said to five times better than humans.

Extremely dexterous, they are the only raptor other than owls with an outer toe that allows them to grasp and hold fish similar to how football plays catch and hold a football. And like a wide receiver wearing gloves they have tiny bumps called sticules on the bottom of their feet which also helps them hold on to their prey while in motion.

So while all of these factors seem to point to why this year's winning Super Bowl winners would have chosen the osprey as a mascot for their team, in actuality the specific bird that flies out of the CenturyLink tunnel at the beginning of each Seahawks game is another species entirely. 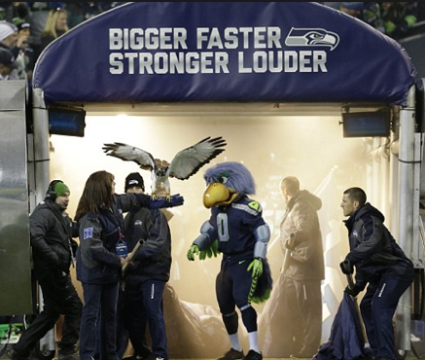 Named "Taima" which is a Native American Indian name for "thunder" replicating the sound made by the "Legion of Boom," the team's avian pet is actually an augur hawk, also known as a buteo hawk. 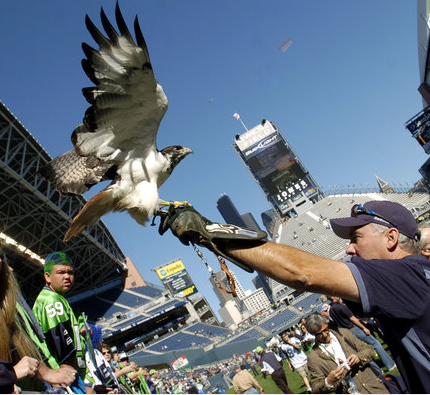 Taima, the augur hawk
To understand how a species of hawk, indigenous to Africa became the centerpiece of the Seahawks, you first have to learn about the bird's trainer, David Knutson. Receiving his first kestrel falcon when he was only 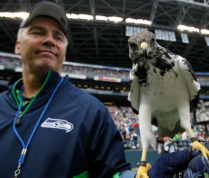 David Knutson & Taima14-years old, he says, “I’ve gone no more than a year since then when I didn’t have a bird of prey,” he said. “Now, I breed falcons.”

In 2003, he was invited to a board meeting with the Seahawks' owners and officials to explain what he could do with a trained hawk as part of the team's pregame shows. Seahawks CEO Tod Leiweke presented the case as such: “The boss (Paul Allen, cofounder of Microsoft) wants to have a hawk on game days. He wants to start a tradition. What do you think you could do?”

Knutson took them down onto the field and verbally imagined a bass-fueled heart beat thumping as a hawk came flying through smoke out of the tunnel to make it a symbolic ritual that would proceed the team players running out to CenturyLink Field, prior to the start of each game.

Then in the winter of 2003, Knutson ordered an augur hawk from the World Bird Sanctuary in St. Louis, and the rest is history.

Is Taima responsible for the  "juju" that got those Seahawks to walk home with the Vince Lombardy trophy February 2, 2014? You know what "juju" is, right? While it has Nigerian origins, in the States it's come to mean a superstition that certain things will only happen when certain factors or people are in place, no matter how improbable. Robert DiNiro and Jennifer Lawrence's characters spar in the movie, "Silver Linings Playbook" regarding the "juju" necessary for the Philadelphia Eagles to win football games.

The Seahawks must have taken a page out of that movie's playbook (pun intended) not only when they acquired Taima, but also when they acknowledge their die-hard fan base --  the "12th Man." The Seahawks' "juju" is predicated on all their fans remaining consistently loyal over the years and Taima is the amulet that has helped make that happen -- all the way up to the Super Bowl! 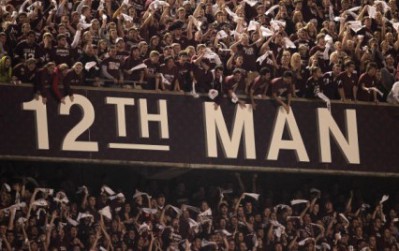 Animal Videos of the Day
Bird Care
Birds
Fun Stories
News Stories
Reviews
Baby Goat On A Trampoline! The Dose Of Cuteness Animal Video Of The Day!!!
Waves of Fish! The Animal Video of the Day!!!

Singing Cat! The "Rockin'" Animal Video of the Day!!!

Starling Beauty! The Animal Video Of The Day!!!
Comments