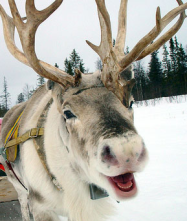 The story of Santa and his flying reindeer might be based on some historical fact. It appears that in Siberia, reindeer (the animal North Americans call caribou) are indigenous — and so is a hallucinogenic mushroom that goes by the genus name of Amanita muscaria. For literary buffs, it’s widely known as the hallucinatory ‘shroom’ responsible for Alice tripping the light fantastic in Wonderland.

The active ingredient of the mushroom is ibotentic acid which is converted in the body into a compound called muscimol — the substance that actually produces the hallucinations. In this region of Russia, the caribou are big fans of the mushroom and seek them out more for getting high than for nourishment.

One interesting factor about ibotenic acid is that only 20-percent gets metabolized in the body to form muscimol. The other 80-percent passes into the animal's urinary tract. In turn, the urine can be a substitute when mushrooms are not available, because licking ibotenic acid-laden urine will produce as much of a high as consuming the shroom itself. This is true for humans as well, as the Chuckchee natives of Siberia actually collect the urine to also trip out on (as crazy as that sounds.) 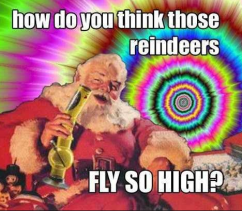 So, as the story goes, it’s not too far-fetched to imagine that a jolly ole shaman-bearded-Chuckchee all dressed up in a red suit with white trim (to match the look of the mushroom) did truly hang out with some hallucinating flying reindeer. The operative word “flying” referencing a ‘flight of fancy,' versus actually leaving terra firma.

“At first glance, one thinks it’s ridiculous, but it’s not,” said Carl Ruck, a professor of classics at Boston University. “Whoever heard of reindeer flying? I think it’s becoming general knowledge that Santa is taking a ‘trip’ with his reindeer.”

Actually the old “cult” of Santa Claus and Christmas that has been passed down through the ages incorporates many traditions, including Christian and Pagan, Old Catholic, Scandinavian, Dutch, German and English.

The late author James Arthur pointed out in his book Mushrooms and Mankind that the practice of the Christmas tree, and the placement of bright red-and-white presents underneath are a direct reference to conifer and birch trees that grow throughout the Northern Hemisphere and the fungi that flourish beneath them.

Santa’s sleigh and reindeer are also references back to various related Northern European mythology. For instance, the Norse God Thor (know in the German language as “Donner”)) flew in a chariot drawn by two goats and Rudolph’s nose looks very similar to the red mushroom itself.

...settling down for a long winter's nap!"It's amazing that a reindeer with a red-mushroom nose is at the head, leading the others,” noted Ruck.

So whether it’s true or not that reindeer can actually fly, it appears there is scientific proof that they do get high. Them caribou are some trippy reindeer indeed!