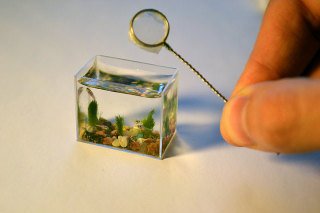 World's smallest aquarium: © Anatoly Konenko Anatoly Konenko has made just about everything else in miniature - or
should I say micro-miniature. A painter and model maker of the tiniest
of objects, the Russian designer has made mini masterpieces of
paintings, books, sculpture, fashion, jewelry out of so many materials that he has become a favorite of collectors, especially heads
of state.

Now Konenko has created a miniature for the living - an aquarium; the world's smallest
aquarium that can contain fish, and I would not doubt that, based on the fact that Konenko's
items have been recognized so many times by the Guinness Book of World
Records.

These photos should give you an idea of just how small is small.... 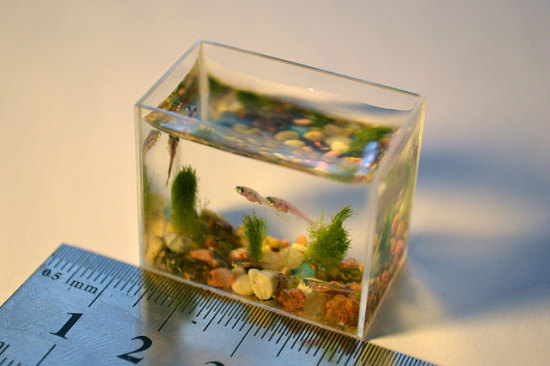 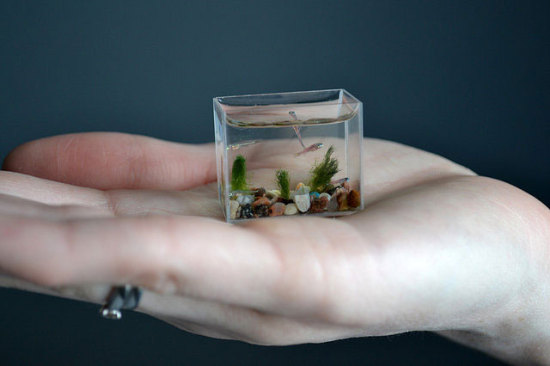 Here, Konenko demonstrates the love and care he has given to the aquarium, as he shows you how it is put together.

If you've fallen in love with the music on the video, it's from Saint-Saens' Carnival of the Animals. As for the world's smallest aquarium, it's not recommended that you keep fish in it very long, but you'll have to contact Konenko himself about the price.  His miniatures have sold for as much as $70,000.

And thanks to colleague Steve Levenstein for fishing out this tip.

For the Year of the Dragon - Double Dragon Aquarium
A Pet Feeder With Facial Recognition: The Mookkie Bowl