One of our favorite mythical creatures at this time of year is less than a hundred years
old and, unlike other myths, has a pretty clear and unusual
history that really typifies modern America. It wasn't enough for Clement C. Moore to create the myth of flying reindeer to give Santa Claus a team of fying reindeer as a snappy way to get around. They first appeared in 1823 in his iconic poem "A Visit From Saint Nicholas." 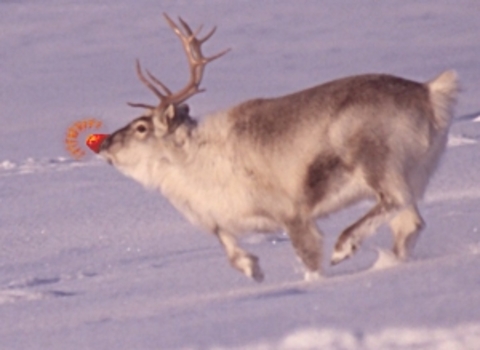 More than 100 years later, in 1939, another reindeer came along who put all of the others to shame. Rudolph is the reindeer we can all identify with as the misfit who finds his own special place in the world after having been tormented by his fellow reindeer for being different. Not only did he find his place to succeed -- but he saved Christmas and became a hero to children everywhere.

That's the basic story, but this isn't just any story. Rudolph was actually created as part of a commercial venture. The old Montgomery Ward department stores used to present children with a free coloring book each Christmas as a gesture of goodwill. In 1939, recovering from years of the Great Depression, the store chain decided that they would save a great deal of money if they created their own Christmas story for the book.

Robert L. May, a copywriter for Montgomery Ward, was assigned the task of writing a poem that would become the latest coloring book. The choice of May was rather ironic in that he was Jewish, but he did not shirk in his responsibility. He drew on his own childhood as a kid who was perpetually picked on, and chose the deer because his four-year-old daughter was obsessed with them at the time.

The resulting coloring book was a huge hit. Ten years later, in 1949, May's brother-in-law, Johnny Marks had rewritten the story and put it to music. Recorded by cowboy singer Gene Autry, Rudolph was once again a huge hit.

Rudolph and his story have been rewritten and retold in a number of different ways, including the stop-motion animated television special starring the voice of Burl Ives. This special has been rerun on television nearly every year since it first aired in 1964. To order a copy of this special click here.

Though Rudolph is fairly new to human mythology, he has the stuff to keep going through the ages. He not only survives but triumphs to prove that everyone is important, no matter how different they are.