Reality TV shows may have gone to the dogs but the world's maladjusted cats are ready for their close-ups as well... just don't get TOO close! “Psycho Kitty”, a new self-help reality show now airing on NatGeo Wild Canada, stars Certified Cat Behavior Consultant and best-selling author Pam Johnson-Bennett along with a host of actual psycho kitties and their frazzled owners. You can check out the show's video trailer here. 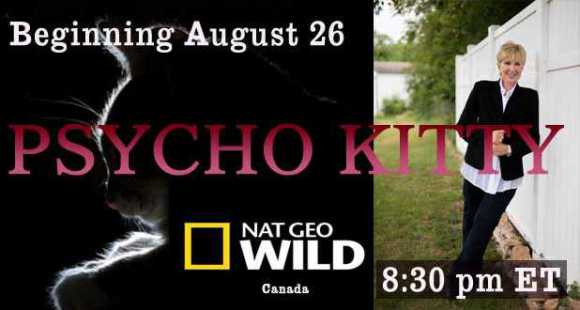 Each 30-minute episode broadcast by NatGeo Wild Canada and hosted by Chris Duchaine airs Wednesday evenings at 8:30pm and we'll assume the show will return next week – same cat time, same cat channel – though it's not yet listed on Nat Geo Wild Canada's online program schedule.

The first episode this writer watched (on September 4th) was filmed in or near Vancouver, Canada and featured three cats owned by a childless young couple. Two of the cats began fighting after one returned from a visit to the vet, and the situation became so frustrating for the owners that they were forced to keep the two cats separated in different rooms. After six years, the owners were at their wits end and it's likely they jumped for joy after learning Psycho Kitty was conducting a casting call.

Not to give anything away, but Psycho Kitty follows a theme proven to be successful by a number of "fix my life" reality shows in which average Joes & Janes call in a skilled professional to offer assistance in difficult situations. In this case, the “fixer” is Pam Johnson-Bennett, a Certified Cat Behavior Consultant and the author of seven best-selling books on cat behavior including Think Like a Cat and... Psycho Kitty!

Nashville, TN-based Johnson-Bennett avoids comparisons to her canine counterpart, Cesar Milan, and states she is “considered a pioneer in the field of cat behavior consulting” rather than the oft-abused term “cat whisperer.” On Psycho Kitty, Johnson-Bennett visits the cats and cat owners at home, observes the current situation, and offers a number of remedies based on her experience as a cat behavioral consultant. The show is edited so that both Johnson-Bennett and the cat owners explain and elaborate to the camera in frequent vignettes WHY there is a problem, HOW it can be solved, and WHAT were the final results.

Follow-up visits are scheduled and filmed one, two and six weeks after Johnson-Bennett's final home consultation and if subsequent shows follow the same script, we can look forward to most situations being resolved in a positive manner.

Cat-owning viewers are left with a slight sense of schadenfreude (basically, pleasure derived from the misfortunes of others) but also can learn handy and practical tips they can apply to their own cat interactions to help improve the lives of all concerned. Psycho Kitty is also airing currently on Sky Uno in Italy and is scheduled to make its broadcast debut in the UK on the Discovery Channel in 2014.

News Stories
Educational
Cats
Don't Do This! The "I'm Gonna Stick My Head in a Crocodile's Mouth" Animal Video of the Day!!!
The Photographer And The Polar Bear