Kissed frogs transforming into princes may be the stuff of fairy tales but one very real amphibian just acquired a royal pedigree, thanks to environmental group Amphibian Ark. 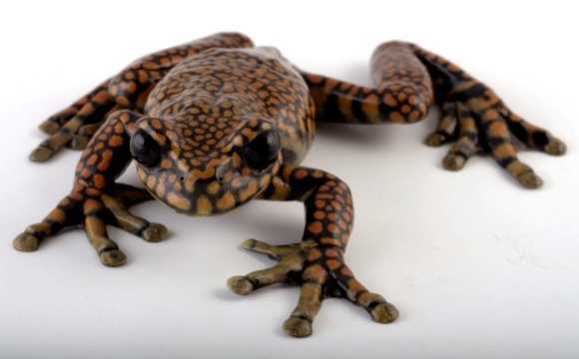 The frog in question didn't have a scientific name as it's only been recently discovered living in the wilds of Ecuador. Displaying a myriad of orange spots against its dark brown skin, the frog is definitely a standout – only its rarity prevented science from noting it until now. Unfortunately, the frog's once-isolated stomping grounds are now under threat from expanding human activities in the Ecuadorean rainforest.

Amphibian Ark hit on an idea that would bring the world's attention to this threatened amphibian while at the same time, salute one of the world's foremost conservationists: Prince Charles of the United Kingdom.

At a ceremony attended by the Price of Wales and representatives of Amphibian Ark, Ecuadorian scientist Dr. Luis A. Coloma presented the heir to the British throne with a glass replica of "Hyloscirtus princecharlesi", the brown and orange frog he discovered four years ago.

The sculpture was crafted by the Frabel Glass Art Studio and Gallery, and was presented to HRH at his home, Highgrove House, on July 5th. “The frogs live inside the forests and he has been using frogs as symbols for his campaign,” stated Coloma, explaining that the Prince had been "a very active campaigner to save tropical rainforests.”

“It's fairly unusual to name a new species after someone but this is seen as something special in honor of the Prince,” said a spokesman for Amphibian Ark. Prince Charles himself was “very touched” by the gesture and as he held up the exquisite glass Hyloscirtus princecharlesi model for photographers, vowed “I shall battle even harder now.” (via Welt Online, images via UPU and COP PARIS)

News Stories
Brave Dog Leads a Rescue to a Burning House! The Awesome Bonus Animal Video of the Day!!!