Potty Pads Are SO Last Year, Try A Fresh Patch Of Real Grass Instead!

Why should kitty have all of the convenience of “going” indoors when your dog has to be let outside to do her business? The bright minds at Fresh Patch have a green solution that will make everyone’s day a little easier…

Even with the most attentive puppy parents, going outside to potty just isn’t always an option for all dogs. Some dogs live in high rise buildings, are getting up there in age, are being potty trained or will flat-out refuse to go out to potty when it’s raining outside. Since the 2013 hurricane season began, Scribbles has already demonstrated that she’d rather use my office than take her business outside during tropical storm Andrea, so there is obviously a huge market for the “ultimate dog toilet.” 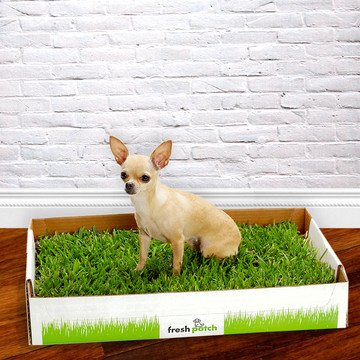 Fresh Patch is a 16” by 24” rectangle of real hydroponically grown grass that is sent to your door whenever you need a replacement. There is so much inherent genius behind Fresh Patch’s idea: since it’s grown indoors and without soil, you won’t have to worry about bringing dirt and bugs into your house. Another huge design innovation is the ability to simply throw out the entire box after a few weeks, unlike the constant upkeep of a litter box. I could only imagine how nasty it would be to hose down and reuse one of those lesser fake grass boxes that I’ve seen online! 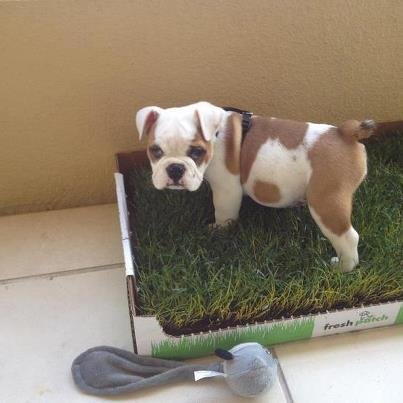 If you’re interested in giving Fresh Patch a chance, note that they ship across the continental United States and you can sign up to receive a new patch as often as your dog needs a replacement. Not only is this real grassy training system an excellent solution to a multitude of potty issues, but a patch of lush, green grass genuinely looks nicer than a wee-soaked pad in the corner.

Click here to order a Fresh Patch for your indoor-bound pup.