A while ago we posted an article concerning Patent#US 6883462: The Doggie Poop Freeze Wand.  While freezing poop is somewhat odd to me (though I did find out the reason while researching this article), the notion of doing so has resulted in a commercial product that, while differing in design from the Freeze Wand, essentially performs the same feat: Poop Freeze. 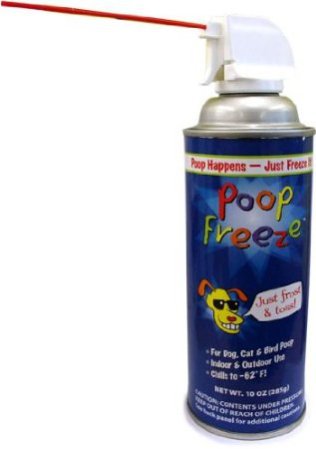 The point of Poop Freeze is not to make popsicles to use a a nasty April Fool's Day trick on your roommate; even I'm not that evil.  What this stuff does is exactly what the title says: freezes dog poop.  This makes the mess easier to pick up and cuts down on the amount of time needed to clean a stained area.

The consensus of efficacy on this product is mixed, with the primary complaints revolving around how it does not solidify lose stools (yuck).  It is also something of a small can, so if you have a Great Dane, I wish you luck.

Customers that support the product really like it.  But as mentioned above, the reviews are a mixed bag.  But, the beauty of the reviews (particularly on Amazon) are the wording--which is poetic in a sick way.  Phrases--such as "When my dog lays a loaf," "doggie tootsie rolls," and vivid descriptions of simply picking the poop up, putting it in a freezer bag, then freezing it--abound.  This last begs the question of why you would ever put poop in the freezer to begin with...  I simply don't understand that.

From what I can gather, Poop Freeze doesn't quite "freeze" poop, so much as it takes that moist, steamy edge off of it--making it less offensive to clean.  So it appears to work... in a sense.

To find out more about Poop Freeze and it's fellow products (Dog Fart Terminator, anyone?), go here.

Top 10 Pet-Friendly Cities In The U.S. Is Yours Among Them?