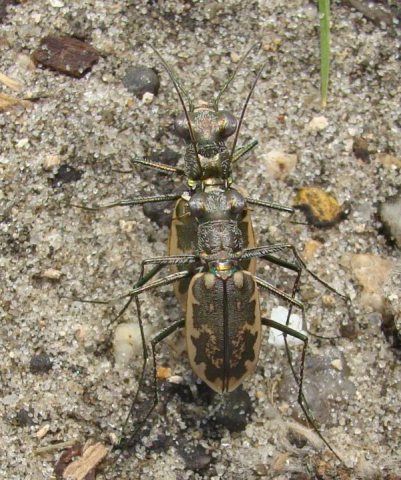 There are a lot of things we still do not know about the animals we share this planet with.  One of the most annoying is that we have very little idea of even how many other species are out there. Take something as common and seemingly ordinary as a beetle, for instance. Pretty much everyone who has written about the topic says there are more species of beetles than any other animals. So how many  --  who knows?  At least 350,000 beetle species have been named, but that is clearly just the tip of a huge beetleberg. Some estimates put the number of beetles at twice that, some even more. However many there are, all of them have been carving out a living--boring into wood, rolling dung balls, or snacking on other insects--for eons.

For many people who enjoy studying beetles (Coleopterists-but let's call them "beetle folks") the pinnacle of beetle evolution is found in the group called Tiger Beetles. Worldwide, Tiger Beetles number only about 2,600 species but if even that number is a bit overwhelming, in the USA there are only about 111 species. Tigers (that's what beetle folks call them for short) are all predators like their big cat namesakes, with scimitar-shaped jaws, long thin legs for running down prey and huge eyes that  can detect the slightest movement.

You can see Tigers just about any time from spring through fall, depending on where you live, and you can  usually find several different kinds in any open area such a river bank, an ocean beach, a path through pine barrens, an abandoned quarry or even a gravel parking lot. Almost all species of Tigers can fly, but they usually only do so when they are frightened and then only in short bursts. They prefer to stand quietly waiting for some smaller insects to cross their path and then pounce on them. Tigers themselves fall prey to larger insect and spider predators and some birds (including owls) have developed a taste for Tigers, so there is just so much being king of the jungle will get you.

Tigers are predators when they are larvae as well.  Like all beetles (and like butterflies) Tigers go through four life stages and the larval stage after the egg is called a "Doodlebug" and looks no more like an adult Tiger than a caterpillar looks like a butterfly.  Doodlebugs dig a circular burrow in the sand or soil and sit for hours waiting for some hapless ant or other small insect to plod by and then, in a nano-second, leap halfway out of the burrow and grab dinner.  They actually have hook-like projections on their backs that grip the side of the burrow and keep them from being pulled out of their hole by the squirming critter they latch on to.

Tigers have always been a favorite with beetle folks, but now many birders, butterfly watchers and nature photography buffs are horning in on what  was once the exclusive province of a dedicated cadre of Tiger aficionados. The variety, attractive patterns and colors, and the challenge of finding (and photographing) the less common and rare Tiger species puts them pretty high in the category of watchable wildlife. And just like birders have their Peterson,  Tiger watchers now have Pearson & Knisely's  field guide that illustrates all of the species found in the USA on gorgeous color plates.  There are Tiger books with a more regional coverage as well, including John Acorn's guide to the Tigers of Alberta.  Acorn, aka "The Nature Nut", also has a video from one of his TV  show episodes that covers Tigers, including a short bit on how to keep them in captivity. 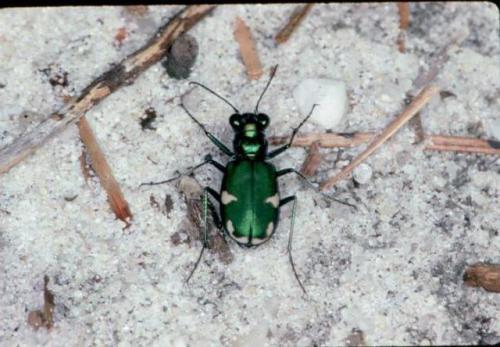 All wildlife is best enjoyed in the wild, but if you want to try and keep some Tigers around to brighten up a terrarium and be entertained by their beauty and behavior, it is all simple enough, provided you can catch some first.  Catching Tigers requires a butterfly net and, even with that, it takes a knack.  Two time-honored techniques are:  (1) clap the net over a Tiger and then grab it before it can get out from under the rim of the net, and (2) scare the tiger into flying and then sweep it while it is in the air.  Neither is as easy as it sounds!  By the way, Tigers can and will bite but they cannot break the skin and the bite is no more that a slight pinch to a human--to an ant it is fatal.

Keep your Tigers in a ventilated container until you get them home and can put them in a terrarium with a hood and a 40 watt bulb. The soil in the terrarium can be anything from rich, dark, loam to clean, white sand. The Tigers will run around like bejeezus for a while looking for a way to escape, but eventually they will settle into their new quarters and start thinking about grub. Although Tigers will eat moistened dog food pellets, I would never dream of feeding mine anything but living, juicy bugs.  I get them by just sweeping a net through weeds and bushes and sorting through the catch to find the plumpest looking critters that I would crave if I was a Tiger.  No spiders, please!  If that is all too much of a bother but you don't like the notion of dog food rations either, Tigers will eat small meal worms and baby crickets that you can get in a pet store.

Like all animals, Tigers need to drink water.  Always keep one side of the terrarium noticeably moist so the Tigers can drink. When they drink, they look like they are eating the wet soil, but take my word for it, they are drinking. Beyond that, they do not need much attention.  Their life span, depending on the species, can be a month or more, some can even live in captivity for more than 4 months.  But I always prefer to keep them for at most 2 weeks and after enjoying and photographing them (and showing them off to other Tiger Beetlers), I let them go where I found them.

So keep an eye open for Tigers on your next walk on a sunny trail.  You never know who will be bitten (and smitten) by the Tiger bug next.

Trilobite Beetle -- The Animal Video Of The Day!!!
Dogs Versus Beetles: Strange But . . . Ew!
Let A Ladybug Join You For Tea
Comments