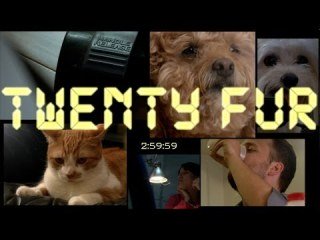 Forget Jack Bauer's 24 -  there's a new agent in town that's dog-gone funnier - and he gets to the point a lot quicker! His mission opens with "the following takes place between 2:58PM and 3:00PM - events occur in dog years." Apparently a threat was issued against CTU (Canine Terrier Unit) that cats were dumping chocolate into the water supply. It's now up to "Jack Bowwow" to save the day --erhh, the next 2 minutes -- and halt this horrifying 'catastrophic' and 'cataclysmic' event. Can our hero rise to the 120-second occasion? Don't know? Well, sit back, grab a TV dinner and watch how this Terrier proves he's no Terrierist .

Purr-odying the wildly successful TV hit show, "24" The Pet Collective just launched "Twenty Fur" on May 6th to its growing fan base on YouTube. For those pet lovers who are unaware, The Pet Collective is one of best online websites for pet enthusiasts who like to be entertained. As their promo states, it's the site's intent to produce quality vids on a daily basis, and they "won't stop until (they) break the Internet with cute, cuddly, pet-filled goodness."

Since debuting in 2012, TPC's videos have been viewed by millions of pet owners and fans around the world. As part of FreemantleMedia, the creative team behind the productions are well-known TV producers and distributors. They work on a tireless schedule to release seven new pet-themed premieres each week.

Videos are uploaded to the TPC's YouTube channel regularly, but when viewing them at their site, you have the additional option of not only LIKE-ing the vids, but you can also

give them extra attention with a woof, meow, aww, LOL, love or awesome by clicking one or all of these buttons-->

After all, how are you going to find out if Jack Bowwow really did save the day -- erhh minutes -- or if 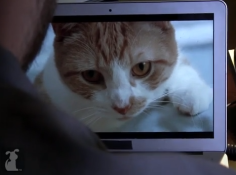 Public Enemy No 1: SnuggleBottomsSnuggleBottom's 'vacuum-sucking' weaponry wiped out CTU?  How far will these felinistas go with 'Operation Sock' to extract their catnip - knowing full well that Jack Bowwow doesn't negotiate with cats?

If concerned for CTU's safety, let the producers know that you don't want this cliffhanger to keep you hanging indefinitely.

Like all the cats and dogs that have proliferated the Internet, TPC is becoming just as omnipresent. Check them out here:

By the way, word just came in that Jack Bauer's an alleged fan! 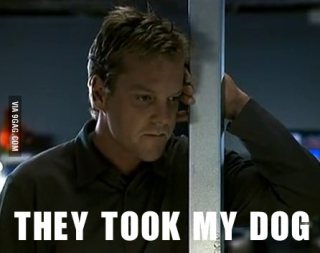 To the Guineamobile! The Crime-fighting Animal Video of the Day!!!

Mogwai - The "Cute Side of the Gremlins" Animal Video of the Day!!!

Tiny Kitten Rubbins! The Animal Video Of The Day!!!

The Correct Way To Carry Groceries -- The Animal Video Of The Day!!!
Comments