PediPaws: The Best Way to Trim Your Pet's Nails?

Trimming
a dog's nails can be tricky for numerous reasons.  The most common problem stems from trimming
the nails too close, as it can be difficult to determine where the blood supply
ends-particularly in dogs with black nails.
This is called "quicking," and if you've ever done this, you know that
it is not only painful to the dog, but also quite bloody.

In
most cases either guillotine clippers or standard scissors clippers are used,
with the unfortunate side-effect of possibly cutting the nail too far. 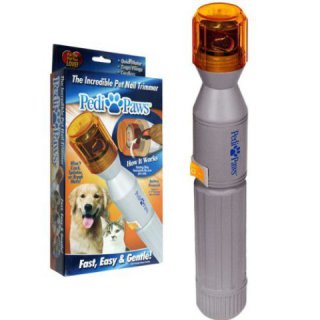 The
PediPaws Pet Nail Trimmer attempts to avoid this problem by using an emery
filing wheel instead of a blade.

But
does it work?

Many
users state that it doesn't, but oddly enough this is not because of the actual
clipping mechanism.  It has to do with
the amount of noise created by the PediPaws device.

The
high speed of the spinning wheel apparently creates a high pitched whine that terrifies
most pets.  Some dogs get past this...
but forget it if you're attempting to use it on a cat; that's when you get
ready for a trip to the hospital to sew your own arm back on (I don't think
insurance covers this-that's why you have to do it yourself).

Some
users praise the PediPaws system once their pets get used to it.  Not only is it less expensive than taking
your pet for grooming, but-once you get your pet calmed down-it is quite a bit
safer.  Instead of cutting the nails,
you're essentially just polishing the edge off of them.

Unfortunately,
the device can only be used in bursts as the high speed wheel generates heat on
the nail.  This can hurt your pet.  And PediPaws burns through batteries at quite
a rapid rate as well.

The
most alarming complaint stems from the pet's nails getting snagged and broken
in the grinder.  And while this is not a
regular occurrence, it is startling nonetheless.

So,
with regret, I cannot state that this is a safe item to use when trimming your
pet's nails.  It is, however, a great
idea that it endeavors to curb any harm to your little furry buddy.  And with a bit of fine tuning, this could be
the future of pet nail grooming.