The amazing “One Fast Cat” exercise wheel for cats met its Kickstarter goal 33.5 times over and countless pre-orders are almost ready for shipping. Move over, hamsters, and let some spirited house cats show you how an exercise wheel can really spin! 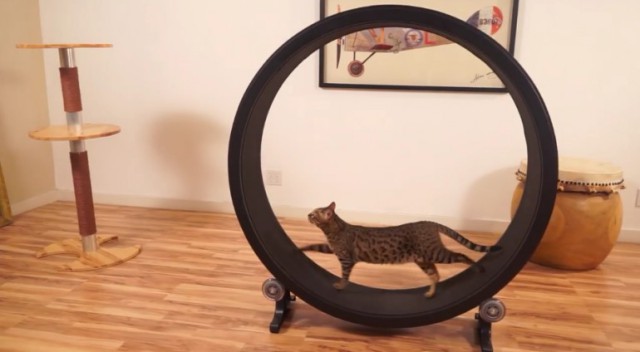 When chief designer Sean Farley took his cat exercise wheel concept to Kickstarter his $10,000 funding goal wasn't all that unreasonable. Thirty days later, over 1,800 backers had pledged almost $345,000 and the One Fast Cat exercise wheel for cats had hit the ground running!

Fast-forward a few months and Camarillo CA-based One Fast Cat is accepting pre-orders at $249 each to be shipped (for free) in late January to early February of 2015. Farley has been busy in the meantime, arranging for packaging and refining the company's manufacturing process. 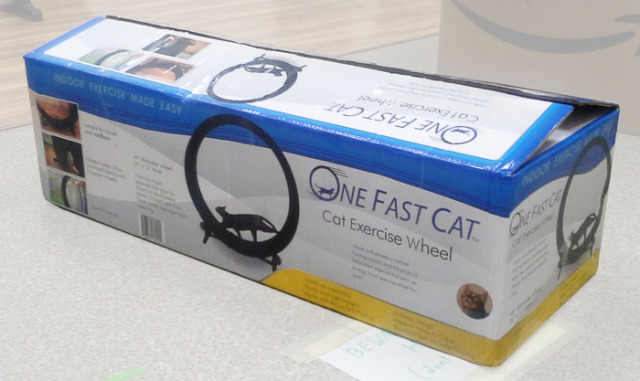 According to their website copy, a “smaller box, smarter design, and a lighter frame allow us to sell the wheel for $200 less than the leading competitor.” Who knew there was competition in the cat exercise wheel market niche?

If you've seen the video, you'll know the One Fast Cat exercise wheel is fun for both cats and their owners, the latter not being able to take their eyes off what appears to be a giant (but very skinny) hamster. Farley has refined the device in a number of ways, such as employing a 10" wide running tread made from a closed cell EVA foam to prevent claws from catching... not a scene we'd like to see. 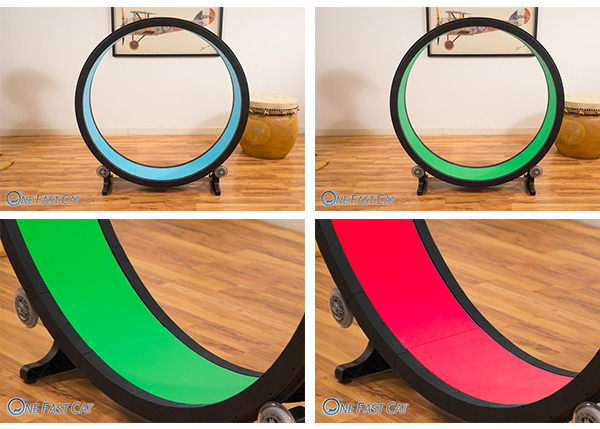 As well, the 48" diameter wheel is made form recycled materials and is designed for compact shipping and ease of assembly upon arrival. Choose from four track colors: black, red, blue or green.

Last but not least, Farley assures cat-owners that One Fast Cat won't end up as one more piece of neglected feline furniture: “House cats possess a natural hunting instinct, and this product helps them expend that pent up energy. It's an exercise wheel for cats!” 'Nuff said... now shut up and take my money!

3 Times The Challenge For Cats With Petstages Tower Of Tracks (w/ Video)
Ice And Heat: That's What Your Arthritic Pets Need Too!

Jackson Galaxy's Catnip Marinater For Your Cat's Toys - No Kidding!