Monarch Butterflies' Migratory Magnetism In Real Life & Under The Dome 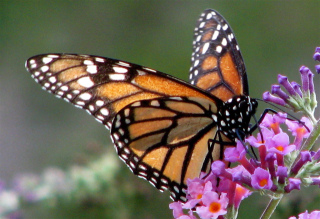 Stephen Kingr the Dome TV drama (returning for a 13-episode second season on Monday, June 30th) actually supports the recent scientific discovery about how these beautiful creatures operate in the real world? It would almost have to be -- since King penned those screenplays a while back -- and the current findings that Monarch butterflies utilize a built-in magnetic compass to direct their migration pattern was only uncovered this past week?

Or is the renowned master of horror and suspense also omnipotent?

The Butterfly Effect Under The Dome. . .

But let's back-up for those that may have never watched the show or for those that need a refresher. In the 13th episode season finale last September, the caterpillar that hatches into a Monarch butterfly begins frantically to fly around the inside of a 'mini dome.' Then in tandem, the black spots the insect creates is instantly replicated on the larger dome that encompasses the entire town of Chester's Mill. The dome is magnetized by these butterflies that appear to have the ability to control this transformation.

This resulted in a complete blackout which prompted viewers to think that the dome was a giant cocoon and the humans it imprisoned were on the verge of transforming into something entirely different, similar to how a butterfly metamorphosizes from its caterpillar stage.

The Butterfly Effect out in the Wild. . .

Up to this past week, it's been assumed that Monarch butterflies have navigated in accordance with a sun compass - meaning they used the position of  sun to determine which direction was due South. As many of us have witnessed, millions of Monarchs along the northeastern corridor of Canada and the U.S. migrate some 2,500 miles each year to the Michoacán mountain range in central Mexico.

However what scientists couldn't seem to put their heads around was why on cloudy days, these insects

Steven Reppertcontinued to migrate, never becoming disoriented? Then this past week, Steven Reppert, a neurobiologist at University of Massachusetts Medical School, led a research team to uncover that these butterflies actually accessed their very own built-in GPS system to migrate -- that their DNA came with a magnetic compass that directs them south, year after year.

Reppert's lab found that the magnetic compass was ultraviolet light-sensitive and an essential orientation mechanism to aid migration when directional daylight cues are unavailable.

"It adds another dimension to this remarkable migration and navigation capabilities that these butterflies have," Reppert said.

Circling Back to the Dome. . .

So back to our novelist Stephen King who appears to have been onto something, in advance of the scientific communities. But if that be the case, will King be as adroit in weaving another critical plot-line into upcoming episodes? It appears that Reppert's research -- while ground-breaking, in and of itself -- also uncovered a negative consequence. Similar to when birds navigated with their own magnetic compass, they can become highly disturbed and disoriented as the result of electronic interference from almost any type of electronic gadgetry -- and concluding that butterflies might be affected in the same way.

But maybe King already knew about this downside, and instead of taking his cues from the field of 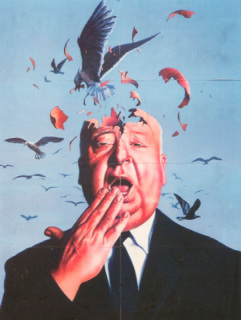 neurobiology will actually be looking to one of his famous predecessors -- another master of suspense who probably taught him a trick or two in the past. Anyone remember Alfred Hitchcock's The Birds and scratching your head for days' afterwards wondering what triggered that bird apocalypse he so demonically portrayed on the Big Screen? Well, it just might have been the electronics of the day which drove those darn avian creatures crazy!

And perhaps with today's smartphones, wearable technology and the such, we might be doing the same to the Monarchs in the very near future - if not in real life - up there, under the Dome, imagined by the deft mind of one Mr. King!

Animal Videos of the Day
Butterflies
Fun Stories
Gadgets and Electronics
Insects
News Stories
Reviews
Is The Horse Bike The Future Of Pedalling? The Animal Video Of The Day!!!