This story has that "Lassie Come Home" feel to it. Major storm! Pet gets loose! Heartbreak! 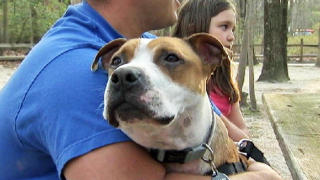 Then a year-and-half later- a reunion like no other. This transpired when a family decided to replace their lost dog with a new pup -- only to find out their wayward pooch was waiting for them at point and time of purchase. Sometimes, truth is stranger than fiction!

When Chuck and Elicia James made the momentous decision to add a new member to their family, they received the wonderful surprise of actually finding "Reckless" - their lost pit-bull!

The James' thought he was lost forever after Superstorm Sandy hit their home in Keansburg, New Jersey. Apparently when the hurricane hit, it opened the fenced-in yard allowing Reckless to be virtually thrust to the winds.

According to a CNN report, while the family never stopped searching for their beloved pet, when their daughter turned ten years-old, they felt it was time to move on - and went to their local SPCA in Monmouth County to seek out Reckless' replacement.

Upon arrival, Reckless was beside himself when he spotted the James' - "he jumped 3 feet in the air," noted  the father. "He immediately recognized us - and the tears came - there wasn't a dry eye in the place." And, it was confirmed he was the real Reckless based on a specific scar he had on the top of his head.

Time to Ante Up the Chip

This story is a lesson for many pet owners, It really emphasizes the importance of having your pets microchipped. The process is fairly straight forward. The animal is implanted by a veterinarian or qualified medical professional with a rice-sized chip that is used to identify them when they run astray.

According to The Humane Society of the United States, each year more than 3 million cats and dogs are euthanized at U.S. animal shelters. This could have been Reckless' fate if he had not been recovered by the James family.

Like Reckless, imagine how happy grieving family members would be when alerted by animal shelters they've found your pet. Microchip technology makes these types of reunions more the norm and not exception as more an more pet owners begin to realize the risks involved.

In Hurricane Sandy's aftermath, thousands of pets were left stranded or woefully separated from their owners. The James' case is just of those stories.

In addition to tags, microchips provide what some say is "a surefire, permanent identification method for pets." Dog-nappers can easily remove dog tags, but it would take a much more involved surgical procedure to remove a microchip.

There's an App for that!

Another means for finding lost pets is a new "facial recognition" app called PIP (Positive Identification of Pet). This software placation stores a photo of your pet with basic information

about your furry friend. When and if it goes missing, you can activate an alert. This broadcasts the information to animal shelters and veterinary clinics within a 15-mile radius of the pet's last known location.

Like in Reckless' case had the James secured this technology, since the app's launch in January, reports indicate this technology has already helped reunite pets and their owners. Most recently, a couple that lost two dogs in Colorado in March were able to use PIP to successfully find their animals. 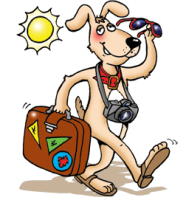 Just be aware whether you select microchipping or facial recognition or both - and it's extremely important that you do -- there are instances when your best friend might just want a little "down" time. Hey, everyone needs a little vacay from the everyday, from time to time - don't you think?

New Triple Dish Pet Feeders Designed For Really Spoiled Pets
PetsLady's Pick: Vintage Romeo and Juliet Kittens Of The Day
Be A Cat This Halloween And Get Twitchy With It!
You Shall Not Pass, Dog! The Animal Video of the Day!!!
Comments