Metamorphosis Of The Butterfly Celebrated In 366th Birthday Google Doodle

Google Doodles are considered today world famous. Whether commemorating an individual famous accomplishment or celebrating a noted celebrity's birthday. Google is more than often aprepos at hitting our sweet spot when it prompts us to remember some of the famous folks that made significant contributions to mankind over the years.

A few years back in a post, titled "Top Ten Google Doodles of 2009," some of the more notable Doodles that year paid homage to Michael Jackson's 51st Birthday, H.G. Wells' 143rd and even a self-proclaimed tribute to the search engine itself -- Google's 11th-year Anniversary.

Today, the birthday of a famous naturalist and scientific illustrator is celebrated. And while perhaps not as well known, as say Michael Jackson, the work of Maria Sibylla Merian is considered ground-breaking by botanists and others familiar with the field of entomology.

"In my youth, I spent my time investigating insects,” the naturalist wrote in the foreword to her book “Metamorphosis insectorum Surinamensium (Metamorphosis of the Insects of Suriname).”

“At the beginning, I

started with silk worms in my home town of Frankfurt. I realized that other caterpillars produced beautiful butterflies or moths, and that silk worms did the same. This led me to collect all the caterpillars I could find in order to see how they changed.”

In 1699, the divorced Merian (with daughter Dorothea) traveled to the Dutch colony of Suriname to study all manner of South American species, drawing her findings for two years.

At a time when few women were educated (or even literate) and rarely travelled, German-born naturalist and artist Maria Sibylla Merian made history with her studies of insects in this territory. Trained as a copperplate engraver and watercolorist, she documented the metamorphosis of butterflies, laying the foundation for modern entomology. What Merian observed when breeding native species of butterfly triggered her curiosity, and spurred her to further investigation; the development from ovum, via larva and chrysalis, to adult butterfly was not fully understood in the 17th century.

Here detailed prints and posters of insects as well as plants garner a pricey purchase even today. At Art.com you can choose from 75 renderings ranging from +$19.99 to $124.99. 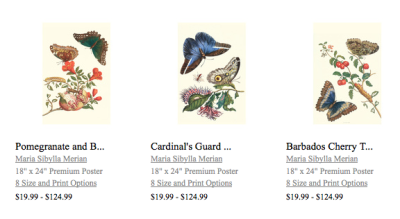 Today, Google celebrates the great naturalist and artist with a home-page Doodle to mark the 366th anniversary of her Frankfurt birth. (Observe closely enough and you will see Google's name subtly spelled out amid the scene’s twisting greenery.) 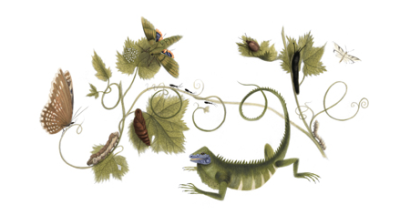 Take A World Of Animals Back To School

Keep Your Own Butterfly In A Jar Forever
Comments