Manhattan's 220 May Be The Dark Horse In NYC's Mayoral Race

Remember The 300 Spartans, the mighty warriors who fought to their deaths in Ancient Greece? Immortalized in films, its the tale of of a small force of men whose courage remained steadfast in going up against the massive Persian armies in 480 BC. Flash forward some 2500+ years, and a smaller group of "underdogs" are up against similar odds in Manhattan -- but this time, they're not men - nor dogs - they're horses!

Everyone loves a good "dark horse" story and in Manhattan, there are 220 of them fighting for their lives. New York City's carriage horses, glamorized by award-winning TV Show Sex in the City -- may charm tourists and day trippers -- but these hard-working equine do not lead charmed lives.

City Council Speaker Christine Quinn, the only female running in the city's mayoral race may lose the contest by a nose or more, based on her position pertaining to the care of these down-trodden animals.

Christine QuinnIn a colorful letter sent to the City Council Speaker Christine Quinn, the eccentric fitness club entrepreneur David Barton said he was "shocked" after watching Ms. Quinn's recent interview on MSNBC's Morning Joe in which her opposition to a bill that would phase out carriage horse industry came up.

"I'm shocked that you can't recognize the cramped working and living conditions and painful lack of exercise afforded the city's most bedraggled residents: the 220 horses used to lug carriages," Mr. Barton writes.

"Pulling heavy carriages is strenuous work, but it doesn't allow the horses a chance to gallop freely as nature intended," he writes. "They don't get to run in a pasture or stretch out their aching muscles. And to make matters worse, at night, these huge noble creatures are kept in stalls so small that they can't even fully extend their legs after navigating through loud, crazy traffic all day."

John CatsThe horses became a huge issue early on in the campaign, when there was an entire mayoral forum devoted to the subject of animal protection. In it, John Catsimatidis, one of the Republican candidates (whose known by many os "John Cats") described how his wife tried to save the family’s aged cat with mouth-to-mouth resuscitation. 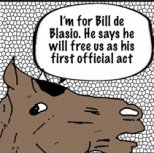 Quinn, on the other hand, who owns two rescue dogs, was identified by the carriage horse crusaders as Public Enemy No. 1. Meanwhile, Mayoral candidate Bill de Blasio, who vowed to retire the horses “first day I’m mayor,” became their hero.

Infamous Anthony Weiner, who single-handily made himself a dark horse due to his rapacious "sexting" addiction, also weighed in on the issue, perhaps to deflect from all of his negative press. “London, Paris, Beijing and Toronto have all banned horse-drawn carriages; it’s time for New York City to follow suit,” he said in one his propaganda bulletins, in which he refers to the practice as “inhumane.”

So Readers, what's your thoughts about the Carriage Horse debate? Is it a side issue with limited concern for New Yorkers, or is it indicative of the "cold-hearted, uncaring" image that most people associate with the 8.2 million that inhabit the city? Surely those odds are stacked up against the 220, if no one gives these dark horses the consideration they deserve for a better life! 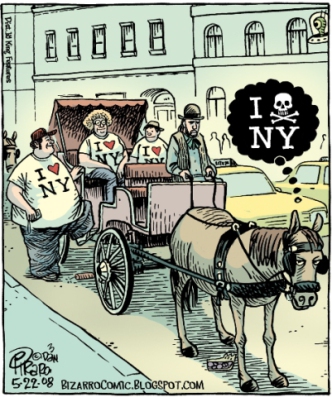 Ever Consider Using An Animal Mascot To Brand Your Brand?
Honor Your Battle Buddy! The BONUS Veteran's Day Animal Video Of The Day!!!