Keyboard Cat, Where Have You Been All These Years?

Similar to a musician who also went by the name, "Cat," Keyboard Cat seems to have ripped a page out of 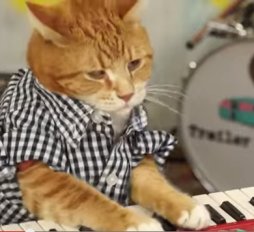 Cat Stevens' playbook (or should we say songbook?) After hitting the charts in the early 70s only to become an instant success, the famed singer-songwriter of 'Tea for the Tillerman' fame removed himself from the public eye for decades before returning to the pop music scene in 2006. 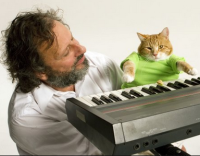 Charlie Schmidt & Keyboard CatIn turn, creator Charlie Schmidt and Keyboard Cat debuted in 2007 prompting their YouTube video to go viral to the tune of 35 million views (and counting) -- only to seemingly lay low for the last 7 years -- until this past week's release of KC's piano cover of '96 Tears' by Question Mark & The Mysterians.

While it appeared to be a case of too much fame too soon, upon doing a little research, it was uncovered that the original KC named "Fatso" passed away decades ago. Clearing up the mystery as to the 2007 date, Fatso was based on some archival footage shot by performance artist Charles Schmidt back in the mid-80s - and it wasn't until 2007 when blogger Brad O'Farrell grabbed it and created this hilarious mash-up video.

Today, "Bento" is the new cat to assume the role of KC and continue the popular legacy. According the Mashable's Brenna Ehrlich, she describes the latest iteration as a cat who's got "synth-drenched magic coming out of his claws." (apparently Ms Erlich is under the impression that Bento is a piano prodigy - but we won't spoil her delusion).

Well, after catching up with the whereabouts of Keyboard Cat, if you have also been so moved by this feline virtuoso that you just can't get enough, there's a store of

merchandise, with tons of memorabilia to choose from. From stuffed animals, to t-shirts to pencil art to even a album of Keyboard Cat's Greatest Hits -- for a cat whose performances are few and far between -- he sure has built up a cult following of consequence.

Stay Afraid, Stay Very Afraid Of The Mantis Shrimp
Need A Little Help Cleaning The House? The Animal Video Of The Day!!!!

Jumpy The Dog Can Write His Own Name -- The Animal Video Of The Day!!!