Kangaroos? In my Japan? It's more likely than you think and now it's inspired a drink! A flurry of 'roo views has inspired one local brewer to hop to it & jump start their sales. Osaki City in Japan's Miyagi Prefecture may not quite be the "Outback of Japan" but the towns more rural areas seem to be just right for an escaped kangaroo or two. 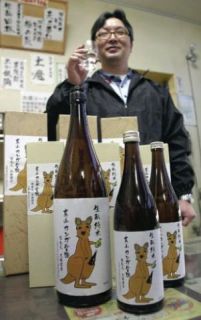 Australia's signature creatures have been imported to Japan as pets for centuries and, as usually is the case, some thoughtless owners simply set them free once they've grown too big to properly look after.

Feral populations of kangaroos and their smaller cousins, wallabies, have taken hold in countries as un-Australian as the UK, Hawaii and the continental United States with individual sightings reported from Europe, Asia and as mentioned, Japan.

It's the Mayama District around Osaki City that has reported the most sightings of the distinctive marsupials, however, and the local sake brewers decided to take advantage of all the free publicity. Liquor stores are now stocking Kangaroo Liquor; basically the same sake they've been selling but with a new, kangaroo-themed label.

Two different sized bottles of the rice wine are available and some part of the sales proceeds are to go toward the establishment of a kangaroo sanctuary in the area. A great idea to be sure, though it's this writer's opinion that Kangaroo Beer might be a better match - "brewed with extra hops". (via Mainichi Daily News, image via lasta29 / Flickr)