Humans have been creating and believing in mythological creatures for
centuries. Humans, being great creatures of habit, continue to do so.
Fifty-years ago this year heralded the beginning of one of the most popular television series of all times -- Dr. Who. One of the most
beloved characters ever on the long-running BBC show is that of a little
metal dog known as K-9. 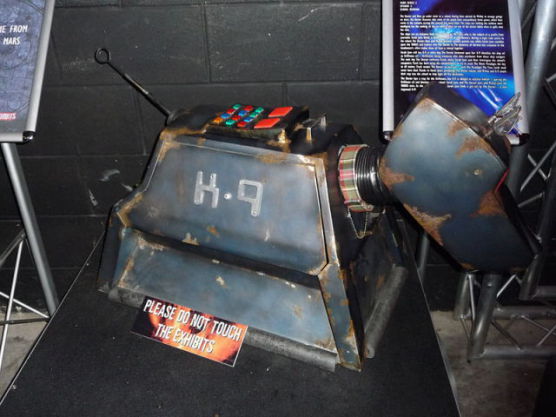 The electronic canine first appeared in the series in the 1970s with the fourth Doctor (played Tom Baker), complete with a laser shooting nose, tiny satellite dishes for ears, and the knowledge of the universe in his cybernetic brain.

Science fiction geeks around the world have a K-9 of their own and many have gone to great lengths to devise their own. Those who have accomplished the feat on some level are please to share their success with the world on You Tube.

K-9 has also starred in the spin-offs of the Dr. Who series -- K-9 and Company, Sarah Jane Adventures, and K-9. The character of K-9 is the clever and delightful creation of Bob Barker and Dave Martin.

The character of K-9 is something you can have for your own through any one of a variety of merchandise, from a bobble-head figure to a cardboard cutout. For a DVD that includes K-9, click here.

Warm Up Halloween With A Dragon's Breath
We All Make Mistakes -- The Animal Video Of The Day!!!

Time For The Unicorn Hat of Your Dreams
Fiji Looking To Pay For Iguana Bounty Hunters!
Comments